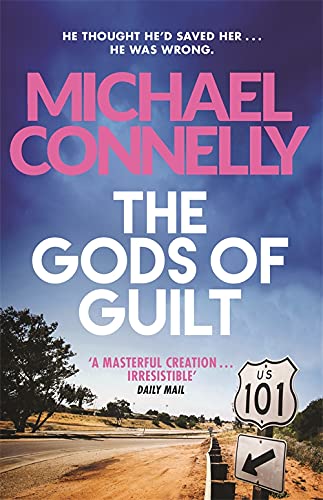 The Gods of Guilt
by Michael Connelly

The Gods of Guilt Summary

The Gods of Guilt by Michael Connelly

The 'Lincoln Lawyer' grapples with a haunting case in a gripping thriller from bestselling author Michael Connelly.

Mickey Haller gets the text 'Call me ASAP - 187', and the California penal code for murder immediately gets his attention.

Suddenly, Mickey's not just trying to get his client off a murder charge, but there is a more personal connection: the victim was Gloria Dayton - his own former client, a prostitute he thought he had rescued and put on the straight and narrow. Far from saving her, Haller may have been her downfall.

Haunted by the ghosts of his own past, and with his own guilt or redemption on the line, he desperately needs to find out who Gloria really was and who, ultimately, was responsible for her death.

The Gods of Guilt Reviews

Smart-talking defence attorney Mickey Haller is the second of the masterful creations of the 57-year-old Connelly - after his unforgettable Detective Hieronymus 'Harry' Bosch.Haller first appeared in 2005 and this is his fifth incarnation. It underlines the fact that Connelly is one of the great crime writers, a novelist who creates a fictional world so succinctly, and inhabits it so purposefully, that you are convinced it must be real. His mastery of place and character, his ease with dialogue, his control of plot gives his books a subtlety that is irresistible * DAILY MAIL *
Michael Connelly is best known for his 'Bosch' series of LAPD prodedurals, but he's created an even better character in sleazy defence lawyer Mickey Haller ... Connelly probes justice and guilt, and the lengths people will go to in fluid, addictive prose. * CATHOLIC HERALD *

GOR005885716
The Gods of Guilt by Michael Connelly
Michael Connelly
Mickey Haller Series
Used - Very Good
Paperback
Orion Publishing Co
2014-07-17
480
1409128733
9781409128731
N/A
Book picture is for illustrative purposes only, actual binding, cover or edition may vary.
This is a used book - there is no escaping the fact it has been read by someone else and it will show signs of wear and previous use. Overall we expect it to be in very good condition, but if you are not entirely satisfied please get in touch with us.