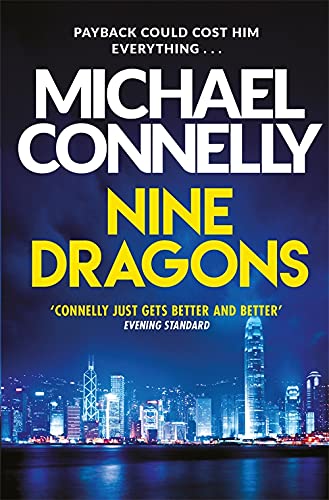 Used Price
£5.19
New RRP £8.99
Free Shipping in the UK
Harry Bosch is alone, without backup - and this time the case is personal. From the No. 1 bestselling author of The Lincoln Lawyer. Features in Amazon Prime's BOSCH TV series.
Reviews:
Trustpilot
Very Good Good

Harry Bosch is alone, without backup - and this time the case is personal. From the No. 1 bestselling author of The Lincoln Lawyer. Features in Amazon Prime's BOSCH TV series.

The shooting of a Chinese liquor store owner in LA brings Harry Bosch back to the Rodney King riots and the moment a stranger gave a young cop sanctuary. Now the debt must be repaid, and Harry soon discovers the old man's death was no ordinary hold-up.

Homing in on clues disregarded by the cops on the scene, Harry builds a picture of corruption and intimidation, with the local triads at the heart of it. But as he tries to build a case and breach the impenetrable wall of silence in the local community, he finds he is taking a dragon by the tail - a dragon whose talons reach well beyond LA, and even the States.

Suddenly the most precious thing in Harry's life is under threat, and he will need to leave the familiarity of his home turf, alone and without backup, if he is going to stop his worst nightmare from happening.

The plot twists twice in the final pages to create an astonishing climax to a thriller not short of heart-in-the-mouth moments. It's hard to keep a long-running crime series fresh yet in Nine Dragons Michael Connelly not only takes heroic Bosch to new places but changes his life forever. He just gets better and better * EVENING STANDARD *
Connelly manages to make Hong Kong every bit as vivid and dangerous as his depictions of LA. What's more, with Bosch on personal overdrive, the tension and pace he builds has never been greater, or more pertinent * DAILY MIRROR *
Though Connelly remains a master at detailing the intricacies of "the job," it is Harry's longing for reunion and connection with his ex-wife and daughter, the overwhelming vulnerability he feels as a father, that makes NINE DRAGONS another standout in the series that should satisfy all readers, whether they are new to Boschworld, occasional visitors or devoted denizens * LA TIMES *
NINE DRAGONS ... not only brings back popular Los Angeles homicide detective Hieronymus (Harry) Bosch, but also features an intricate, wide-ranging and utterly compelling story, to go with credible, sympathetic characters and exotic locations, unusual for Harry, who seldom leaves L.A. * GLOBE AND MAIL *
The globe-spanning element here expands the canvas, and there's an appearance by Connelly's other protagonist, sardonic Mickey Haller - plus some satisfying, out-of-the-blue narrative twists * INDEPENDENT *

GOR006607630
Nine Dragons by Michael Connelly
Michael Connelly
Harry Bosch Series
Used - Very Good
Paperback
Orion Publishing Co
2014-11-06
496
1409155749
9781409155744
N/A
Book picture is for illustrative purposes only, actual binding, cover or edition may vary.
This is a used book - there is no escaping the fact it has been read by someone else and it will show signs of wear and previous use. Overall we expect it to be in very good condition, but if you are not entirely satisfied please get in touch with us.