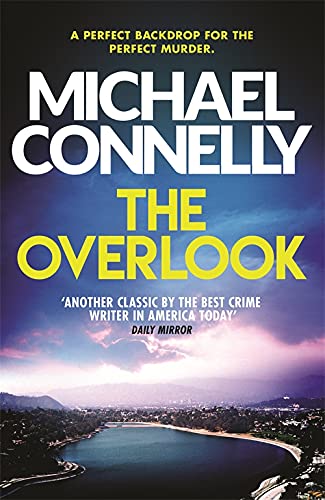 The Overlook
by Michael Connelly

In Stock
£5.49
An execution on the overlook above the Mulholland Dam entangles Bosch with FBI Agent Rachel Walling and Homeland Security. The brilliant thirteenth Harry Bosch novel from the award-winning No. 1 bestselling author.
Very Good Good
6 in stock

The Overlook by Michael Connelly

An execution on the overlook above the Mulholland Dam entangles Bosch with FBI Agent Rachel Walling and Homeland Security. The brilliant thirteenth Harry Bosch novel from the award-winning No. 1 bestselling author.

When a physicist is murdered in LA, it seems the killer has no fear of publicity, leaving the body on the Mulholland overlook, a site with a stunning view over the city. And when it's discovered that the victim turned over a quantity of a lethal chemical to his killer before he died, Harry knows he has more than just a single death to worry about.

Alongside the forces of Homeland Security, Harry realises he must solve the murder or face unimaginable consequences.

...by then I was hooked, as is so often the way with Connelly, and as the pace quickened it slowly became clear that this was another classic by the best crime writer in America today * THE MIRROR *
The final chapters contain chases and twists galore - even so, there is time for some of that hard-nosed poetry which makes Connelly a cut above his competitors * EVENING STANDARD *
When you pick up one of Connelly's novels, be resigned to losing the rest of the day. He is one of those get-you-on-the edge-of-your seat, can't-put-it-down storytellers - and he can write * GLASGOW EVENING TIMES *
[Bosch is] still a brilliant detective, and the only one to solve Connelly's well-constructed puzzle * SUNDAY TELEGRAPH *
Some people get very excited about the propect of a new Harry Bosch book ... But it's not surprising. Fifteen years and umpteen books on, Connelly is still pulling in the crowds ... Thrilling rollercoaster? Take it as read * DAILY SPORT *
Connelly has established himself as one of crime's most satisfying reads * METRO *
This gripping Harry Bosch mystery starts with a terrorist-style execution ... this is an increasingly cynical and dyspeptic Harry's first case in his new job * IRISH INDEPENDENT *

GOR006646844
The Overlook by Michael Connelly
Michael Connelly
Harry Bosch Series
Used - Very Good
Paperback
Orion Publishing Co
2015-02-05
336
1409157326
9781409157328
N/A
Book picture is for illustrative purposes only, actual binding, cover or edition may vary.
This is a used book - there is no escaping the fact it has been read by someone else and it will show signs of wear and previous use. Overall we expect it to be in very good condition, but if you are not entirely satisfied please get in touch with us.