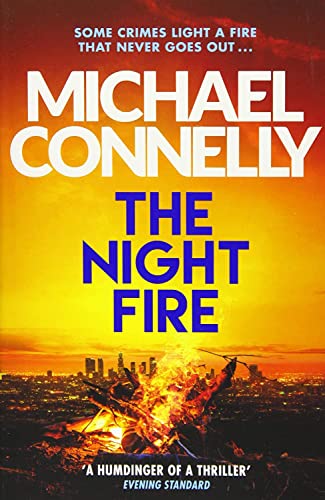 The Night Fire
by Michael Connelly

Crime doesn't come better than Connelly: the brand new blockbuster from the crime-thriller powerhouse.
'Michael Connelly is the greatest American crime writer of his generation' THE TIMES

The Night Fire: The Brand New Ballard and Bosch Thriller by Michael Connelly

SOME CRIMES LIGHT A FIRE THAT NEVER GOES OUT...

'Connelly is at the top of his game - a humdinger of a thriller'
Evening Standard, Books of the Year

'A superb story that never once draws breath'
Daily Mail

A JUDGE MURDERED IN A CITY PARK
Mickey Haller, the Lincoln Lawyer, defends the man accused.

AN UNSOLVED HOMICIDE FROM A LIFETIME AGO
Harry Bosch is left a missing case file by his mentor who passed away. He was the man who taught Bosch that everybody counts, or nobody counts. Why did he keep the case all these years? To find the truth - or bury it?

IN L.A. CRIME NEVER SLEEPS
But in Ballard, Bosch and Haller: the fire always burns. Will it light the way - or leave their lives in ashes?

'One of the world's greatest crime writers' Daily Mail

'The pre-eminent detective novelist of his generation' Ian Rankin

'A genius' Independent on Sunday

'A terrific writer with pace, style and humanity to spare' The Times

'One of the great storytellers of crime fiction' Sunday Telegraph

'No one writes a better modern thriller than Connelly' Evening Standard

The Night Fire is further proof of Connelly's undimmed creativity. Juggling a characteristically crowded storyline, Connelly demonstrates once again why he is held in such esteem * Financial Times *
Taut cop thriller * Love It *
Advanced and interwoven with characteristic meticulous craft * Sunday Times *
Michael Connelly is the greatest American crime writer of his generation. The tension builds from the first page. Past and present collide as three cases ricochet off each other in surprising ways * The Times *
A cracker of a thriller, packed with surprising twists and turns, and seamlessly bringing together all of Michael Connelly's compelling lead characters, allowing each to shine in their own particular way. * Irish Independent *
Connelly has few equals as a thriller writer and it speaks volumes for the world he has created for Harry Bosch [...] The Night Fire is masterfully structured and a dizzying array of plot lines dovetail in a hugely enjoyable and satisfying series of finales. * Daily Express *
One of the greatest crime writers roars back with a superb story [...] and never once draws breath. * Daily Mail *
Michael Connelly is at the top of his game in The Night Fire [...] complexity and compassion combine in a humdinger of a thriller. * Evening Standard *

MICHAEL CONNELLY is the author of thirty-two previous novels, including the #1 New York Times bestsellers Dark Sacred Night, Two Kinds of Truth, and The Late Show. His books, which include the Harry Bosch series and the Lincoln Lawyer series, have sold more than seventy-four million copies worldwide. Connelly is a former newspaper reporter who has won numerous awards for his journalism and his novels. He is the executive producer of Bosch, starring Titus Welliver, and the creator and host of the podcast Murder Book. He spends his time in California and Florida.

GOR010502238
The Night Fire: The Brand New Ballard and Bosch Thriller by Michael Connelly
Michael Connelly
Used - Very Good
Paperback
Orion Publishing Co
2020-04-16
560
1409186067
9781409186069
N/A
Book picture is for illustrative purposes only, actual binding, cover or edition may vary.
This is a used book - there is no escaping the fact it has been read by someone else and it will show signs of wear and previous use. Overall we expect it to be in very good condition, but if you are not entirely satisfied please get in touch with us.