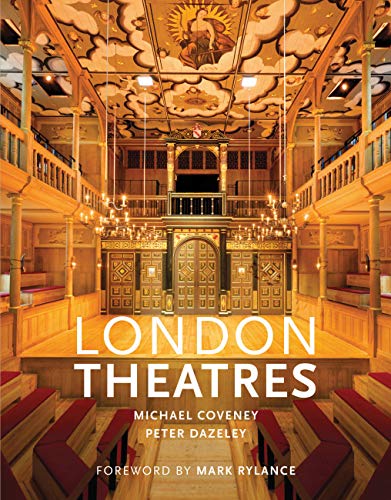 In Stock
£17.99
Leading theatre critic Michael Coveney invites you on a tour of the forty-five theatres which make the London stage what it is, with stories of the architecture and the productions which have defined each one. Sumptuous photographs by Peter Dazeley of the public areas, auditorium and backstage complete the picture.
Very Good
Only 1 left

London is the undisputed theatre capital of the world. From world-famous musicals to West End shows, from cutting-edge plays to Shakespeare in its original staging, from outdoor performance to intimate fringe theatre, the range and quality are unsurpassed. Leading theatre critic Michael Coveney invites you on a tour of forty-five theatres that make the London stage what it is. With stories of the architecture, the people and the productions which have defined each one, alongside sumptuous photographs by Peter Dazeley of the public areas, auditorium and backstage, this illustrated overview of London's Theatres is a book like no other. A must for fans of the stage!

One of the country's most respected drama critics, Michael Coveney has written about theatre for over three decades, as staff critic on the Financial Times, Observer and Daily Mail. His books include a history of the Glasgow Citizens Theatre and biographies of Andrew Lloyd Webber and Dame Maggie Smith.

PETER DAZELEY FRPS, known as Dazeley, is a celebrated London photographer renowned for fine art and advertising photography. He was born in West Kensington and studied photography at Holland Park School, now known as the Socialist Eton. His work has won many awards from organisations across the world, including the Association of Photographers and the Royal Photographic Society in the UK, EPICA in France, Applied Arts Magazine in Canada, and Graphis Inc. in the USA. Dazeley is a member of the Association of Photographers and a fellow of the Royal Photographic Society. Peter Dazely is the photographer of Unseen London, London Uncovered, London Theatres (all Frances Lincoln).

Mark Rylance is an actor who recently appeared as Thomas Cromwell in the BBC's Wolf Hall. He is also a trustee of the Shakespearean Authorship Trust and an Honorary Bencher of The Middle Temple Hall. He was the Artistic Director of Shakespeare's Globe Theatre for ten years and wrote the play I Am Shakespeare.

GOR009015705
London Theatres by Michael Coveney
Michael Coveney
Used - Very Good
Hardback
Frances Lincoln Publishers Ltd
2017-08-23
272
0711238618
9780711238619
N/A
Book picture is for illustrative purposes only, actual binding, cover or edition may vary.
This is a used book - there is no escaping the fact it has been read by someone else and it will show signs of wear and previous use. Overall we expect it to be in very good condition, but if you are not entirely satisfied please get in touch with us.