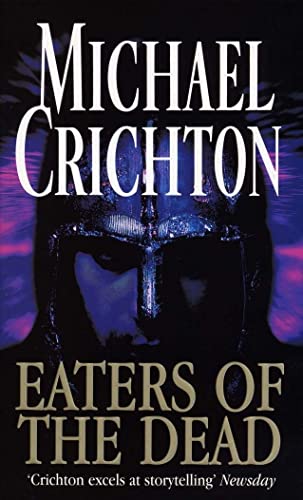 Eaters Of The Dead
by Michael Crichton

In Stock
£2.69
The Eaters of the Dead is a brilliant, stirring tale of historical adventure which deserves a place on readers bookshelves alongside Michael Crichton's bestselling techno-thrillers.
Very Good Good Well Read
10 in stock

Eaters Of The Dead Summary

Eaters Of The Dead by Michael Crichton

The Eaters of the Dead is a brilliant, stirring tale of historical adventure which deserves a place on readers bookshelves alongside Michael Crichton's bestselling techno-thrillers. It is AD922 and Ibn Fadlan is sent north from Baghdad as a peaceful ambassador. But before he reaches his destination, he falls in with some Vikings and when they are attacked by mystical bloodthirsty creatures in the midst of a terrible fog, he reluctantly agrees to become the prophesied 13th warrior in order for them to survive. Later turned into a major Hollywood film, Eaters of the Dead is an imaginative and breathlessly exciting retelling of the Beowulf myth that rescues the story from dry academic analysis and resurrects it as an action-packed story of adventure.

Eaters Of The Dead Reviews

GOR001145759
Eaters Of The Dead by Michael Crichton
Michael Crichton
Used - Very Good
Hardback
Cornerstone
1997-10-06
208
0099222825
9780099222828
N/A
Book picture is for illustrative purposes only, actual binding, cover or edition may vary.
This is a used book - there is no escaping the fact it has been read by someone else and it will show signs of wear and previous use. Overall we expect it to be in very good condition, but if you are not entirely satisfied please get in touch with us.