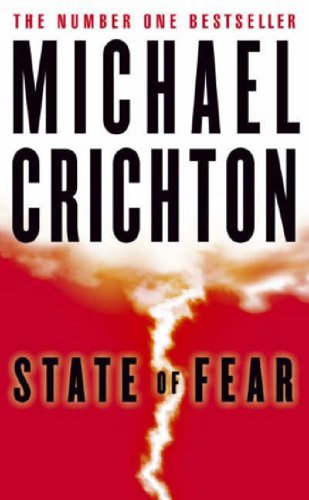 State of Fear
by Michael Crichton

The Number One international bestselling author of Jurassic Park, Congo and Sphere takes on global warming in this gripping and critically acclaimed thriller.

State of Fear by Michael Crichton

The Number One international bestselling author of Jurassic Park, Congo and Sphere takes on global warming in this gripping and critically acclaimed thriller.

In Paris, a physicist dies after performing a laboratory experiment for a beautiful visitor.

In the jungles of Malaysia, a mysterious buyer purchases deadly cavitation technology, built to his specifications.

In Vancouver, a small research submarine is leased for use in the waters of New Guinea.

And in Tokyo, an intelligence agent tries to understand what it all means.

`One of the most ingenious, inventive thriller writers around... Another high-concept treat... written in consummate page-turning style' Observer

`This is Crichton on top form, preying on our fears about new technology and convincing us that we aren't half as afraid as we should be' The Times

`Mixing cutting-edge science with thrills and spills, this is classic Crichton' Daily Mirror

`Crichton masterfully maintains the suspense throughout the fast-paced story ... Prey will invade your nightmares for a long time to come' Time Out

Michael Crichton is the author of The Andromeda Strain, Congo, Jurassic Park, Rising Sun, The Terminal Man, The Lost World, Airframe and Timeline. He is the winner of an Edgar Award (1980; The Great Train Robbery) as well as an Emmy, a Peabody, and a Writer's Guild of America Award for the television series ER

GOR000492178
State of Fear by Michael Crichton
Michael Crichton
Used - Very Good
Paperback
HarperCollins Publishers
2005-08-15
736
0007181604
9780007181605
N/A
Book picture is for illustrative purposes only, actual binding, cover or edition may vary.
This is a used book - there is no escaping the fact it has been read by someone else and it will show signs of wear and previous use. Overall we expect it to be in very good condition, but if you are not entirely satisfied please get in touch with us.