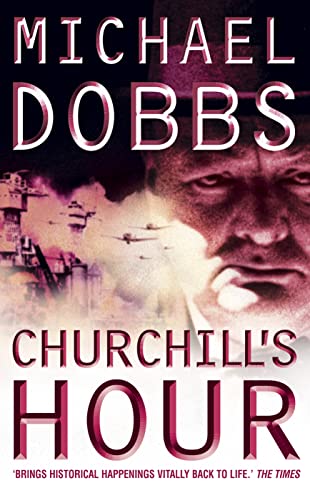 The combination of Michael Dobbs' excellent writing skills and historical passion, and the legendary character of Winston Churchill, have provided two triumphantly successful books in WINSTON'S WAR and NEVER SURRENDER.

The combination of Michael Dobbs' excellent writing skills and historical passion, and the legendary character of Winston Churchill, have provided two triumphantly successful books in WINSTON'S WAR and NEVER SURRENDER.

In 1941, the war appears to be going badly on many fronts. Churchill is the confirmed leader and so his domestic political struggles are slightly lessened, but battered, bloody and almost bankrupt, Britain limps on. Churchill knows his country cannot win the war alone.

An alliance with America is paramount, and Churchill is determined to develop and use a friendship with Averall Harriman, American Ambassador to Britain, and personal friend of President Franklin Roosevelt. But his son's wife exploits this first. Pamela Churchill's passionate affair, conducted under her father-in-law's roof, presents Churchill with the appalling dilemma between saving his country, and allowing his son Randolph to be cuckolded.

With no British battlefield successes, and with a jubilant Germany controlling Europe, 1941 was a bleak year. America continued resolute against fighting, but by the year's close Pearl Harbour had forced America into the war. Why had the Japanese been persuaded to attack American targets? And how were the rumours of the attack prevented from reaching American ears?

Decisions of love and war are often matters of perception. And so it was in this case.

This is an extraordinary novel of a man at bay, a nation facing disaster, and the political skills, human dilemmas and brilliant leadership that saved the day.

'An author who can bring historical happenings so vitally back to life, and made all the more impressive by being historically accurate in every aspect.' Anthony Howard, The Times, on Winston's War 'An intriguing tale of espionage and treason that charts the increasingly tangled lives of a unique cast. This is a work to enthral.' Daily Mail 'Dobbs has done a brilliant job in evoking the drama the despair of Britain hovering on the edge of the abyss.' Sunday Express

Bestselling author Michael Dobbs was at Mrs Thatcher's side as she took her first step into Downing Street as Prime Minister and was a key aide to John Major when he was voted out. In between times he was bombed in Brighton, banished from Chequers and blamed for failing to secoure a Blair-Major television debate. He is now one of the country's leading political commentators.

GOR001061437
Churchill's Hour by Michael Dobbs
Michael Dobbs
Used - Very Good
Paperback
HarperCollins Publishers
2005-08-23
464
0007183054
9780007183050
N/A
Book picture is for illustrative purposes only, actual binding, cover or edition may vary.
This is a used book - there is no escaping the fact it has been read by someone else and it will show signs of wear and previous use. Overall we expect it to be in very good condition, but if you are not entirely satisfied please get in touch with us.