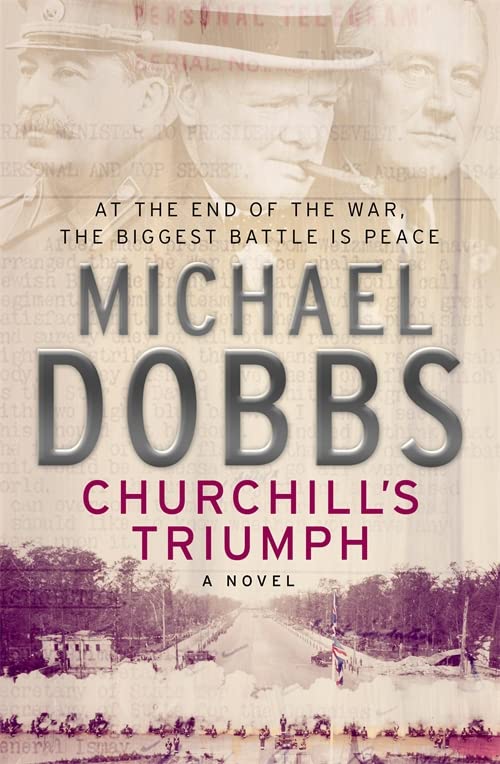 Churchill's Triumph: An explosive thriller to set your pulse racing by Michael Dobbs

A brilliant novel about one of the giants of 20th-century history, set at the close of World War Two, from the author of the No. 1 bestseller House of Cards (inspiration for the Netflix series).

Churchill's Triumph: An explosive thriller to set your pulse racing by Michael Dobbs

The Second World War is coming to an end, and the three most powerful men on earth meet to thrash out the details of peace . . . Churchill's Triumph is an unputdownable thriller by Michael Dobbs, author of the No. 1 bestseller that inspired the hit Netflix series House of Cards. Perfect for fans of John Grisham and Philip Kerr.

At the close of World War Two, in 1945, the most powerful men alive - Winston Churchill, Roosevelt and Stalin - gather to survey the smoking ruins of Europe at the famous Yalta Conference. They must try and create a future where the atrocities of the last few years could never happen again. But as the negotiations begin that will eventually change the map of the world, the tension and pressure on political partnerships intensifies.

In the fight against Hitler, Churchill's difficult relationship with the leaders of the Allied Powers, Roosevelt and Stalin, becomes a power struggle that will have the most dramatic global consequences . . .

'Explosive in every sense. His novels are famously predictive' Daily Mail

Michael Dobbs was born in the same hour as Prince Charles. It doesn't seem to have done him too much harm. In the years since then he has become a doctor of philosophy, a senior adviser to both Margaret Thatcher and John Major, a Deputy Chairman of Saatchi & Saatchi, a regular presenter of BBC TV's Despatch Box and a columnist for the Mail on Sunday. In his spare time he has written books ranging from the bestselling House of Cards trilogy that became a hugely popular TV series to his recent brilliant series of historical novels about the life of Winston Churchill. He tries to live quietly with his wife and four sons near a pub and a church in Wiltshire.
GOR002639581
9780755332007
0755332008
Churchill's Triumph: An explosive thriller to set your pulse racing by Michael Dobbs
Michael Dobbs
Used - Very Good
Paperback
Headline Publishing Group
2006-07-03
480
N/A
Book picture is for illustrative purposes only, actual binding, cover or edition may vary.
This is a used book - there is no escaping the fact it has been read by someone else and it will show signs of wear and previous use. Overall we expect it to be in very good condition, but if you are not entirely satisfied please get in touch with us
Trustpilot