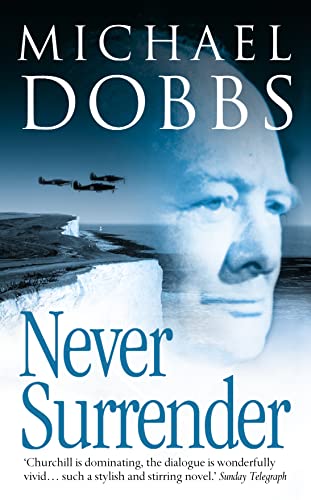 Winston Churchill embarks on a battle of wills with Adolf Hitler in the run-up to Dunkirk. The compelling new historical novel from the acclaimed author of Winston's War.

Winston Churchill embarks on a battle of wills with Adolf Hitler in the run-up to Dunkirk. The compelling new historical novel from the acclaimed author of Winston's War.

Winston Churchill at his lowest ebb - pitted in personal confrontation with Adolf Hitler, and with ghosts from his tormented past.

Friday 10 May 1940. Hitler launches a devastating attack that within days will overrun France, Holland and Belgium, and bring Britain to its knees at Dunkirk. It is also the day Winston Churchill becomes Prime Minister. He is the one man capable of standing in Hitler's way - yet Churchill is still deeply mistrusted within his own Cabinet and haunted by the memory of his tortured father.

Never Surrender is a novel about the courage and defiance that were displayed in abundance - not just by Churchill, but by ordinary men and women over three of the most momentous weeks in British history.

From the reviews for Winston's War

`Dobbs is an author who can bring historical happenings so vitally back to life ... made all the more impressive by being, so far as I could see, historically accurate in every respect.'
Anthony Howard, THE TIMES

`An intriguing tale of espionage and treason that charts the increasingly tangled lives of a unique cast. This is a work to enthral.'
DAILY MAIL

`Dobbs has done a brilliant job in evoking the drama and despair of Britain hovering on the edge of the abyss.'
SUNDAY EXPRESS

Michael Dobbs' books have a knack of being uncannily timely. His award-winning House of Cards trilogy foreshadowed both the downfall of Margaret Thatcher and the increasing turmoil within the Royal Family, while his Goodfellowe MP novels showed how a small band of highly motivated men could bring a great city to its knees. His most recent bestselling novel, Winston's War, was published just as the nation was voting for Winston Churchill as the Greatest Briton.

He has been an academic, a broadcaster, a senior corporate executive and an adviser to two Prime Ministers.

GOR000504773
Never Surrender by Michael Dobbs
Michael Dobbs
Used - Very Good
Paperback
HarperCollins Publishers
2004-06-07
448
0007107277
9780007107278
N/A
Book picture is for illustrative purposes only, actual binding, cover or edition may vary.
This is a used book - there is no escaping the fact it has been read by someone else and it will show signs of wear and previous use. Overall we expect it to be in very good condition, but if you are not entirely satisfied please get in touch with us.