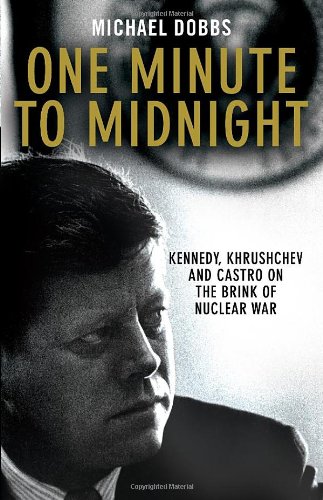 One Minute To Midnight
by Michael Dobbs

Used Price
£21.49
Free Shipping in the UK
Tells the human and the political story of Black Saturday, taking readers not just into the White House and the Kremlin but along the entire Cold War battlefront with the men who were preparing to fight.
Very Good

One Minute To Midnight Summary

One Minute To Midnight by Michael Dobbs

October 27, 1962, was known as Black Saturday in the Kennedy White House. With the Cuban missile crisis at its height, this was a day of nail-biting developments, when the hands of the metaphorical Doomsday Clock reached one minute to midnight and the world grew closer than ever before (or since) to nuclear apocalypse. On Black Saturday, the opposing Cold War leaders, John F. Kennedy and Nikita Khrushchev, mobilized their forces to fight a nuclear war on land, sea and air. The watching world held its breath in terror. In Bobby Kennedy's words, 'There was a feeling that the noose was tightening on all of us, on Americans, on mankind, and that the bridges to escape were crumbling.'Michael Dobbs tells both the human and the political story of Black Saturday, taking the reader not just into the White House and the Kremlin but along the entire Cold War battlefront with the men who were preparing to fight. We see inside U-2s and nuclear submarines; the armies gathering in Florida and Cuba; American warships and Cuban anti-aircraft batteries; the CIA, the NSA and the KGB; Cold War radio stations and listening posts; the feverish conspiracies of Cuban exiles; Castro's headquarters; Khrushchev's dacha; the underground bunker being prepared for Kennedy; the streets of Washington, Moscow and Havana.Using a wealth of untapped archival material, Michael Dobbs brings a fresh perspective to this crucial moment in twentieth-century history, which witnessed one of the greatest mobilizations of men and equipment since the Second World War. His thrilling narrative features a cast of characters - including Soviet veterans never before interviewed by a western writer - that ranges from the ordinary to the larger than life, all with unique stories to tell.

One Minute To Midnight Reviews

Advance praise for Michael Dobbs's One Minute to Midnight:
"One Minute to Midnight is nothing less than a tour de force, a dramatic, nail-biting page-turner that is also an important work of scholarship. Michael Dobbs combines the skills of an experienced investigative journalist, a talented writer and an intelligent historical analyst. His research is stunning. No other history of the Cuban missile crisis matches this achievement."
-Martin Sherwin, coauthor of "American Prometheus"
"Is there anything new left to be said about the 1962 missile crisis? As it turns out, there is. This book puts forward the first reports I've seen of Soviet-Cuban plans to wipe out the Guantanamo Naval Base. That an American U-2 strayed over the Soviet Union during the crisis has been known all along, but Dobbs gives us the first full account of what happened. There were so many inadvertent steps and so many miscalculations involved in the crisis that we were lucky to come through it with the world in one piece."
--Wayne Smith, Director of the Cuban Program, Center for International Policy
"Did we need another book on the Cuban Missile Crisis of 1962? Anyone reading One Minute to Midnight will quickly realize that we "did "need another -- and that this is it. This is unquestionably the most complete and accurate account of the crisis that we have, and will no doubt long remain so. Michael Dobbs has managed to combine the careful and thorough research of a scholar into the ability of an able journalist to bring his findings to life in a dramatic story that illuminates the historical events it examines with lively characterization of the people who made up the cast of the drama. It is firstrate great history and a great read!"
--Ambassador Raymond Garthoff, former intelligence analyst and author of "Reflections on the Cuban Missile Crisis
"
"At a time of danger for a nation it is important for political leaders first to think, then to think more and try avoid shooting. This book gives a day by day perspective on how two world leaders, John Kennedy and Nikita Khrushchev, showed their ability to manage a crisis. Thanks to them, humanity survived and we are able to read this book."
-Sergei Khrushchev
"Dobbs's hour-to-hour chronology of those tormenting days when the world stood on the verge of nuclear holocaust is riveting. To enhance his knowledge of these events and installations, he studied the photographs taken during the crisis; Dobbs is the first historian to use these important images."
--Dino Brugioni, author of "Eyeball to Eyeball
"

Michael Dobbs was born in Belfast, Northern Ireland, and educated at the University of York, with fellowships at Princeton and Harvard. He is a reporter for The Washington Post, where he spent much of his career as a foreign correspondent covering the collapse of communism. His Down with Big Brother:The Fall of The Soviet Empire was a runner-up for the 1997 PEN award for nonfiction. He lives in Bethesda, Maryland.

GOR003030639
One Minute To Midnight by Michael Dobbs
Michael Dobbs
Used - Very Good
Hardback
Cornerstone
2008-06-05
448
0091796660
9780091796662
N/A
Book picture is for illustrative purposes only, actual binding, cover or edition may vary.
This is a used book - there is no escaping the fact it has been read by someone else and it will show signs of wear and previous use. Overall we expect it to be in very good condition, but if you are not entirely satisfied please get in touch with us.