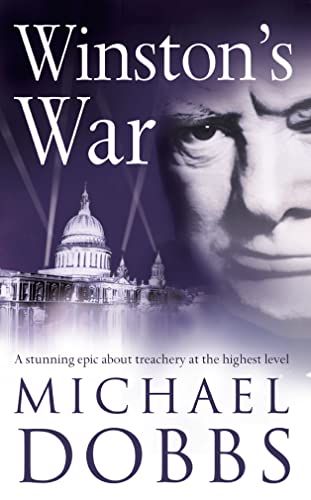 From a bestselling novelist with an unrivalled insight into the workings of power comes a compelling new novel exploring Winston Churchill's remarkable journey from the wilderness to No 10 Downing Street at the beginning of World War II.

From a bestselling novelist with an unrivalled insight into the workings of power comes a compelling new novel exploring Winston Churchill's remarkable journey from the wilderness to No 10 Downing Street at the beginning of World War II.

Saturday 1 October 1938. Two men meet. One is elderly, the other in his twenties. One will become the most revered man of his time, and the other known as the greatest of traitors.

Winston Churchill met Guy Burgess at a moment when the world was about to explode. Now in is astonishing new novel, Michael Dobbs throws brilliant fresh light upon Churchill's relationship with the Soviet spy and the twenty months of conspiracy, chance and outright treachery that were to propel Churchill from outcast to messiah and change the course of history.

`Michael Dobbs' latest novel is a vividly realised record of the events surrounding the great Briton's remarkable rise. An intriguing tale of espionage and treason ... a work to enthral. This novel never ceases to be compelling.'
Stephanie Cross, Daily Mail

`Churchill is a brooding presence ... as riveting as Francis Urquhart. Dobbs' novel is astonishingly historically accurate. He certainly knows where all the skeletons are hidden and where every body is buried. He manages to give a vivid impression of the seamier side of politics in the year that immediately preceded the outbreak of war ... compelling.'
Anthony Howard, The Times

`Dobbs has done a brilliant job in evoking the drama and despair of Britain hovering on the edge of the abyss.'
Sunday Express

For two decades, Michael Dobbs has been at the right hand of political controversy. He was at Mrs Thatcher's side as she took her first step into Downing Street as Prime Minister, and was a key aide to John Major when he was voted out. In between times he was bombed in Brighton, banished from Chequers and blamed for failing to secure a Blair-Major television debate.

GOR000297862
Winston's War by Michael Dobbs
Michael Dobbs
Used - Very Good
Paperback
HarperCollins Publishers
2003-05-06
704
0006498000
9780006498001
N/A
Book picture is for illustrative purposes only, actual binding, cover or edition may vary.
This is a used book - there is no escaping the fact it has been read by someone else and it will show signs of wear and previous use. Overall we expect it to be in very good condition, but if you are not entirely satisfied please get in touch with us.