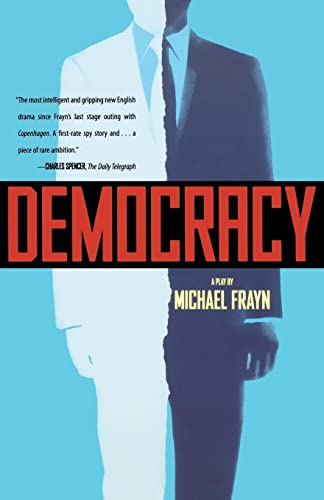 In Stock
£4.49
Frayn once again creates out of the known events of 20th-century history a drama of extraordinary urgency and subtlety, reimagining the interactions and motivations of Willy Brandt as he became chancellor of West Germany in 1966 and those of his political circle.
Very Good
Only 1 left

Democracy: A Play by Michael Frayn

A brilliant exploration of character and conscience from the author of COPENHAGEN, set amid the tensions of 1960s Berlin

In Democracy, Michael Frayn once again creates out of the known events of twentieth-century history a drama of extraordinary urgency and subtlety, reimagining the interactions and motivations of Willy Brandt as he became chancellor of West Germany in 1966 and those of his political circle, including G nter Guillaume, a functionary who became Brandt's personal assistant-and who was eventually exposed as an East German spy in a discovery that helped force Brandt from office. But what circumstances allowed Brandt to become the first left-wing chancellor in forty years? And why, given his progressive policies, did the East German secret police feel it necessary to plant a spy in his office and risk bringing down his government?
Michael Frayn writes in his postscript to the play, "Complexity is what the play is about: the complexity of human arrangements and of human beings themselves, and the difficulties that this creates in both shaping and understanding our actions."

"The most intelligent and gripping new English drama since Frayn's last stage outing with Copenhagen. A first-rate spy story and . . . a piece of rare ambition." --Charles Spencer, The Daily Telegraph

"Anyone who mourns the disappearance of leaders with real civility and magnetism--or of topical dramas with the same attributes--will be buoyed by [this] extraordinary play . . . Democracy is not another game of Cold War cat-and-mouse. It's really a play about loyalty, one that, in a satisfying way, ends up testing ours." --Peter Marks, The Washington Post

"[Democracy] achieves something close to impossible. It fascinates you with the ins and outs, ups and downs, of German politics: not in the Hitler era, not in the chaos of the 1920s, but in the supposedly boring 1970s." --Benedict Nightingale, The New York Times

Michael Frayn has been a newspaper reporter as well as a novelist, playwright, filmmaker, and translator. Among his most acclaimed works are the novel Headlong and the play Noises Off. He lives in London.

GOR005022372
Democracy: A Play by Michael Frayn
Michael Frayn
Used - Very Good
Paperback
Faber Inc
2004-04-30
144
0571211097
9780571211098
N/A
Book picture is for illustrative purposes only, actual binding, cover or edition may vary.
This is a used book - there is no escaping the fact it has been read by someone else and it will show signs of wear and previous use. Overall we expect it to be in very good condition, but if you are not entirely satisfied please get in touch with us.