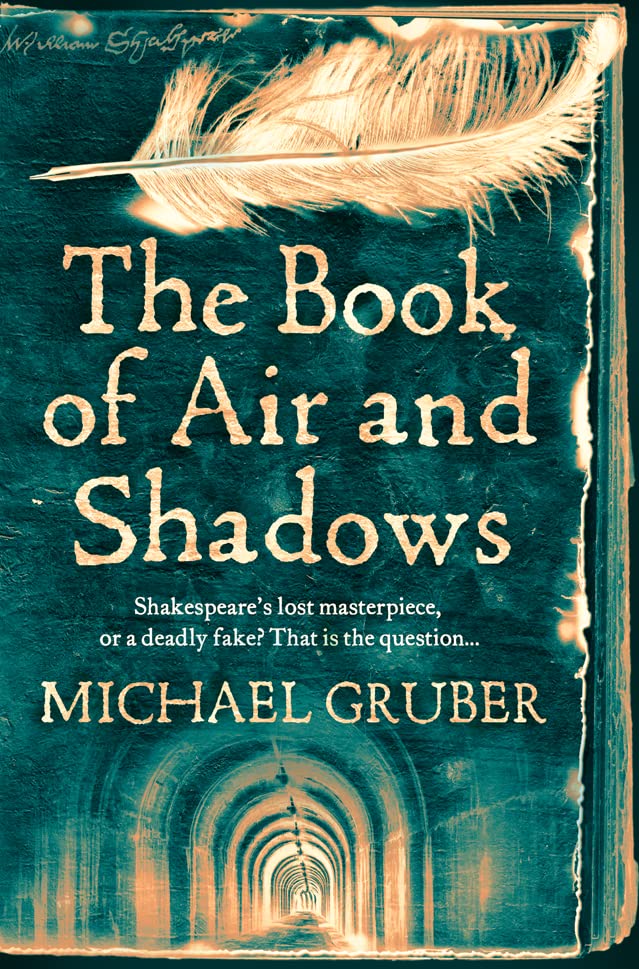 The Book of Air and Shadows
by Michael Gruber

A clever, pacey thriller set around the search for a lost Shakespearean play.

The Book of Air and Shadows Summary

The Book of Air and Shadows by Michael Gruber

A clever, pacey thriller set around the search for a lost Shakespearean play.

Tap-tapping the keys and out come the words on this little screen, and who will read them I hardly know. I could be dead by the time anyone actually gets to read them, as dead as, say, Tolstoy. Or Shakespeare. Does it matter, when you read, if the person who wrote still lives?

These are the words of Jake Mishkin, whose seemingly innocent job as an intellectual property lawyer has put him at the centre of a deadly conspiracy and hunt to find a priceless treasure connected to William Shakespeare. As he awaits a killer-or killers-unknown, Jake writes an account of the events that led to this deadly endgame, a frantic chase that began when a fire in an antiquarian bookstore revealed the hiding place of letters containing a shocking secret, concealed for four hundred years. In a frantic race from New York to England and Switzerland, Jake finds himself matching wits with a shadowy figure who seems to anticipate his every move. What at first seems like a thrilling puzzle waiting to be deciphered soon turns into a dangerous game of cat-and-mouse, where no one - not family, not friends, not lovers - is to be trusted.

Moving between twenty-first-century America and seventeenth-century England, `The Book of Air and Shadows'is a modern thriller that brilliantly re-creates William Shakespeare's life at the turn of the seventeenth century and combines an ingenious and intricately layered plot with a devastating portrait of a contemporary man on the brink of self-discovery . . . or self-destruction.

The Book of Air and Shadows Reviews

"Author Michael Gruber and his publisher have to be thrilled by the comparisons being drawn between 'The Book of Air and Shadows' and 'The Da Vinci Code,' but . . the real treasure for the readers is the players themselves. . . Shakespeare might have called them 'poor players who strut and fret their hour upon the stage,' but as they leave the stage at the end of this exhilarating run, you hope you hear from them - and Gruber - again soon.
New York Daily News.

'Bookshelves across the country are cracking under the weight of thrillers... But few will surpass The Book of Air and Shadows when it comes to energetic writing, compellingly flawed characters, literary scholarship, mathematical conundrums and that oh-so-necessary dose of comic relief...
(We never had this much fun reading The Da Vinci Code.) Gruber...has raised the stakes in the thriller genre.'
USA Today

"If all the world's a play, and we are merely players, where do we get our scripts? That's the underlying question in Michael Gruber's smart new thriller, 'The Book of Air and Shadows.' . . . If 'The Book of Air and Shadows,' a contemporary Elizabethan reference to the missing play, sounds overly refined, think again. Gruber's themes may be lofty, but his people - notably his narrators - are fully fleshed and often funny, with arch senses of humour and irony. . . Only rarely does pop culture, from any century, fail these players. When it does, even that is telling. . . Because ultimately even the wily misfits of 'The Book of Air and Shadows' realize we are all simply unaccommodated man, the thing itself, looking for the right words to make sense out of our worlds."
Boston Globe.

Michael Gruber has a Ph.D. in marine biology from the University of Miami. He lives in Seattle, Washington, and is currently at work on another novel.

GOR000373385
The Book of Air and Shadows by Michael Gruber
Michael Gruber
Used - Very Good
Paperback
HarperCollins Publishers
2007-08-01
576
0007251904
9780007251902
N/A
Book picture is for illustrative purposes only, actual binding, cover or edition may vary.
This is a used book - there is no escaping the fact it has been read by someone else and it will show signs of wear and previous use. Overall we expect it to be in very good condition, but if you are not entirely satisfied please get in touch with us.