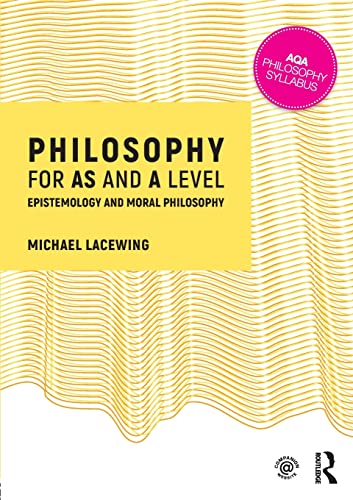 Philosophy for AS and A Level by Michael Lacewing

Philosophy for AS and A Level: Epistemology and Moral Philosophy by Michael Lacewing

Philosophy for AS and A Level is an accessible textbook for the new 2017 AQA Philosophy syllabus. Structured closely around the AQA specification this textbook covers the two units shared by the AS and A Level, Epistemology and Moral Philosophy, in an engaging and student-friendly way. With chapters on 'How to do philosophy', exam preparation providing students with the philosophical skills they need to succeed, and an extensive glossary to support understanding, this book is ideal for students studying philosophy.

The companion website hosts a wealth of further resources, including PowerPoint slides, flashcards, further reading, weblinks and handouts, all structured to accompany the textbook. It can be found at www.routledge.com/cw/alevelphilosophy.

Michael Lacewing is a teacher of philosophy and theology at Christ's Hospital school, and a former Reader in Philosophy and Vice-Principal Academic at Heythrop College, University of London. He is founder of the company A Level Philosophy (www.alevelphilosophy.co.uk), and advises the British Philosophical Association on matters related to philosophy in schools.

How to use this book

How to do philosophy

1 How to do philosophy

An aside: why reason?

Engaging with the text

What you need to know

I. What is knowledge?

A. Knowledge and its definition

The definition of knowledge

The purpose and nature of definition

Can propositional knowledge be defined?

Key points: knowledge and its definition

B. The tripartite view

The tripartite definition of knowledge

Thinking harder: A note on certainty

Are the conditions individually necessary?

Justification is not a necessary condition of knowledge

Truth is not a necessary condition of knowledge

Belief is not a necessary condition of knowledge

Truth and the third condition

Summary: What is knowledge?

II. Perception as a source of knowledge

The argument from perceptual variation

The argument from illusion

Thinking harder: the argument from hallucination

The disjunctive theory of perception

Scepticism about the existence of mind-independent objects

The existence of the external world is the best hypothesis

Thinking harder: the existence of mind-independent objects is not a hypothesis

Representation, resemblance and the nature of physical objects

Berkeley on primary and secondary qualities

The immediate objects of perception are mind-dependent objects

Thinking harder: idealism and the cause of our perceptions

Problems with the role played by God in Berkeley's idealism

Arguments from illusion and hallucination

Summary: perception as a source of knowledge

III. Reason as a source of knowledge

Leibniz on knowledge of necessary truths

The mind as a `tabula rasa'

Hume on impressions and ideas

Issues with the empiricist theory of concepts

Thinking harder: the concept of substance

B. The intuition and deduction thesis

The meaning of `intuition' and `deduction'

Empiricist responses to the cogito

Clear and distinct ideas and God

Empiricist responses to the Trademark argument

Descartes' proof of the external world

The concept of a physical object

Empiricist responses to Descartes' proof of the external world

Summary: reason as a source of knowledge

IV. The limits of knowledge

The particular nature of philosophical scepticism

The distinction between philosophical scepticism and normal incredulity

B. Responses to scepticism

Summary: the limits of knowledge

`The Principle of Utility'

Is pleasure the only good?

Smart on hedonistic and non-hedonistic utilitarianism

Stage 2: Only happiness is good

Moral integrity and the individual's intentions

Thinking harder: The good will again

The second formulation of the Categorical Imperative

The view that consequences of actions determine their moral value

Morality is a system of hypothetical imperatives

The value of certain motives

The good for human beings

Virtues, the doctrine of the mean and the importance of feelings

The role of education in the development of a moral character

The role of practical wisdom

The relation between practical wisdom, virtue and action

Guidance on how to act

The origins of moral principles: reason, emotion/attitudes, or society

The distinction between cognitivism and non-cognitivism

Key points: The distinction between cognitivism and non-cognitivism

From cognitivism to moral realism

Thinking harder: is the `naturalistic fallacy' a real fallacy?

The argument from Hume's fork

Can moral anti-realism account for how we use moral language?

4 Preparing for the exam

The structure of the exam

Understanding the question: giving the examiners what they are looking for

Revision: it's more than memory

Exam technique: getting the best result you can

NPB9781138690394
9781138690394
1138690392
Philosophy for AS and A Level: Epistemology and Moral Philosophy by Michael Lacewing
Michael Lacewing
New
Paperback
Taylor & Francis Ltd
2017-06-13
458
N/A
Book picture is for illustrative purposes only, actual binding, cover or edition may vary.
This is a new book - be the first to read this copy. With untouched pages and a perfect binding, your brand new copy is ready to be opened for the first time
Trustpilot