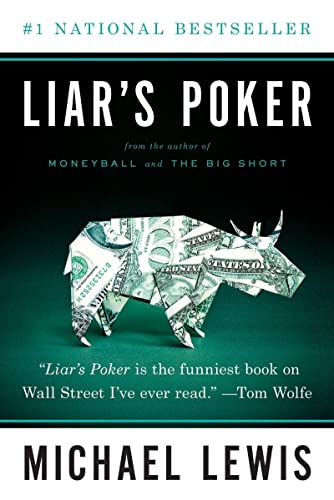 Michael Lewis was fresh out of Princeton and the London School of Economics when he landed a job at Salomon Brothers, one of Wall Street's premier investment firms. During the next three years, Lewis rose from callow trainee to bond salesman, raking in millions for the firm and cashing in on a modern-day gold rush. Liar's Poker is the culmination of those heady, frenzied years-a behind-the-scenes look at a unique and turbulent time in American business. From the frat-boy camaraderie of the forty-first-floor trading room to the killer instinct that made ambitious young men gamble everything on a high-stakes game of bluffing and deception, here is Michael Lewis's knowing and hilarious insider's account of an unprecedented era of greed, gluttony, and outrageous fortune.

"The funniest book on Wall Street I've ever read." -- Tom Wolfe
"Often profane, always hilarious, right on the mark." -- People
"So memorable and alive . . . one of those rare works that encapsulate and define an era." -- Fortune

GOR003543806
Liar's Poker by Michael Lewis
Michael Lewis
Used - Very Good
Paperback
WW Norton & Co
2010-05-14
320
039333869X
9780393338690
N/A
Book picture is for illustrative purposes only, actual binding, cover or edition may vary.
This is a used book - there is no escaping the fact it has been read by someone else and it will show signs of wear and previous use. Overall we expect it to be in very good condition, but if you are not entirely satisfied please get in touch with us.