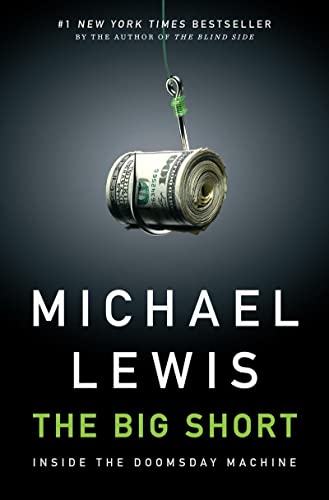 The Big Short
by Michael Lewis

Out of Stock
£5.99
The #1 New York Times bestseller: a brilliant account-character-rich and darkly humorous-of how the U.S. economy was driven over the cliff.
Very Good
Only 0 left

The Big Short: Inside the Doomsday Machine by Michael Lewis

When the crash of the U. S. stock market became public knowledge in the fall of 2008, it was already old news. The real crash, the silent crash, had taken place over the previous year, in bizarre feeder markets where the sun doesn't shine, and the SEC doesn't dare, or bother, to tread: the bond and real estate derivative markets where geeks invent impenetrable securities to profit from the misery of lower- and middle-class Americans who can't pay their debts. The smart people who understood what was or might be happening were paralyzed by hope and fear; in any case, they weren't talking.

The crucial question is this: Who understood the risk inherent in the assumption of ever-rising real estate prices, a risk compounded daily by the creation of those arcane, artificial securities loosely based on piles of doubtful mortgages? Michael Lewis turns the inquiry on its head to create a fresh, character-driven narrative brimming with indignation and dark humor, a fitting sequel to his #1 best-selling Liar's Poker. Who got it right? he asks. Who saw the real estate market for the black hole it would become, and eventually made billions of dollars from that perception? And what qualities of character made those few persist when their peers and colleagues dismissed them as Chicken Littles? Out of this handful of unlikely-really unlikely-heroes, Lewis fashions a story as compelling and unusual as any of his earlier bestsellers, proving yet again that he is the finest and funniest chronicler of our times.

"No one writes with more narrative panache about money and finance than Mr. Lewis....[he] does a nimble job of using his subjects' stories to explicate the greed, idiocies and hypocrisies of a system notably lacking in grown-up supervision....Writing in faintly Tom Wolfe-ian prose, Mr. Lewis does a colorful job of introducing the lay reader to the Darwinian world of the bond market." -- Michiko Kakutani - The New York Times
"Superb: Michael Lewis doing what he does best, illuminating the idiocy, madness and greed of modern finance. . . . Lewis achieves what I previously imagined impossible: He makes subprime sexy all over again." -- Andrew Leonard - Salon.com
"One of the best business books of the past two decades." -- Malcolm Gladwell - New York Times Book Review
"I read Lewis for the same reasons I watch Tiger Woods. I'll never play like that. But it's good to be reminded every now and again what genius looks like." -- Malcolm Gladwell - New York Times Book Review
"I recommend everyone within the sound of my voice to read [this] book." -- Senate Majority Leader Harry Reid (D-Nev.)
"I've joined a lot of other people in just finishing Michael Lewis's book, The Big Short, and it's really an eye-opener of what was going on at the time that this real estate bubble was created." -- Senate Majority Whip Dick Durbin (D-Ill.)
"I read it, marked it up for my staff, underlined it, made copies and asked them to read it." -- Senator Carl Levin (D-Mich.)
"[A]n incredible piece of commentary on Wall Street." -- Rep. Jackie Speier (D-Calif.)
"If you're wondering if there's importance or an urgency to this issue, read the book The Big Short by Michael Lewis, and then, when you're finished reading, come back to the floor and say that you support this amendment [on financial reform]." -- Senator Byron Dorgan (D-North Dakota)

GOR002769444
The Big Short: Inside the Doomsday Machine by Michael Lewis
Michael Lewis
Used - Very Good
Hardback
WW Norton & Co
2010-03-02
288
0393072231
9780393072235
Short-listed for Financial Times/Goldman Sachs Business Book of the Year Award 2010
Book picture is for illustrative purposes only, actual binding, cover or edition may vary.
This is a used book - there is no escaping the fact it has been read by someone else and it will show signs of wear and previous use. Overall we expect it to be in very good condition, but if you are not entirely satisfied please get in touch with us.