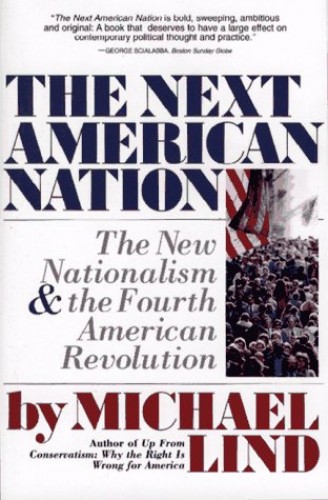 The Next American Nation
by Michael Lind

In Stock
£6.49
A revisionist view of American history in which the author challenges the orthodoxies regarding ethnicity and national identity that fuel the cultural wars, identifies the new majority that will have a great impact of America and its place in the world, and provides an agenda for sweeping reforms.
Very Good
Only 1 left

The Next American Nation Summary

The Next American Nation: New Nationalism and the Fourth American Revolution by Michael Lind

Are we now, or have we ever been, a nation?

As this century comes to a close, debates over immigration policy, racial preferences, and multiculturalism challenge the consensus that formerly grounded our national culture. The question of our national identity is as urgent as it has ever been in our history. Is our society disintegrating into a collection of separate ethnic enclaves, or is there a way that we can forge a coherent, unified identity as we enter the 21st century?

In this "marvelously written, wide-ranging and thought-provoking"* book, Michael Lind provides a comprehensive revisionist view of the American past and offers a concrete proposal for nation-building reforms to strengthen the American future. He shows that the forces of nationalism and the ideal of a trans-racial melting pot need not be in conflict with each other, and he provides a practical agenda for a liberal nationalist revolution that would combine a new color-blind liberalism in civil rights with practical measures for reducing class-based barriers to racial integration.

A stimulating critique of every kind of orthodox opinion as well as a vision of a new "Trans-American" majority, "The Next American Nation" may forever change the way we think and talk about American identity.

The Next American Nation Reviews

Richard Bernstein The New York Times A brash, refreshingly unorthodox, always interesting performance by a young man who defies the usual political categories of left and right, liberal and conservative....He brilliantly describes the elements of a common American culture.

GOR009955753
The Next American Nation: New Nationalism and the Fourth American Revolution by Michael Lind
Michael Lind
Used - Very Good
Paperback
Simon & Schuster Ltd
1997-01-06
16
0684825031
9780684825038
N/A
Book picture is for illustrative purposes only, actual binding, cover or edition may vary.
This is a used book - there is no escaping the fact it has been read by someone else and it will show signs of wear and previous use. Overall we expect it to be in very good condition, but if you are not entirely satisfied please get in touch with us.