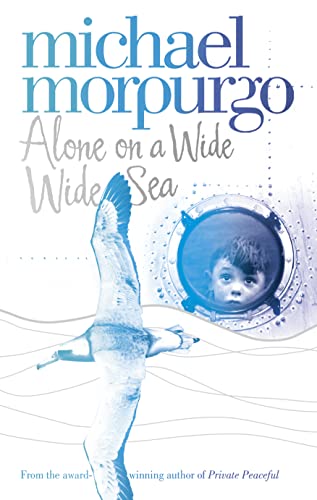 Alone on a Wide Wide Sea
by Michael Morpurgo

How far would you go to find yourself? The lyrical, life-affirming new novel from the bestselling author of Private Peaceful

Alone on a Wide Wide Sea by Michael Morpurgo

How far would you go to find yourself? The lyrical, life-affirming new novel from the bestselling author of Private Peaceful

There were dozens of us on the ship, all ages, boys and girls, and we were all up on deck for the leaving of Liverpool, gulls wheeling and crying over our heads, calling good-bye, I thought they were waving good-bye. None of us spoke. It was a grey day with drizzle in the air, the great sad cranes bowing to the ship from the docks as we steamed past. That is all I remember of England...

When orphaned Arthur Hobhouse is shipped to Australia after WW II he loses his sister, his country and everything he knows. The coming years will test him to his limits, as he endures mistreatment, neglect and forced labour in the Australian outback. But Arthur is also saved, again and again, by his love of the sea. And when he meets a nurse whose father owns a boat-building business, all the pieces of his broken life come together.

Now, at the end of his life, Arthur has built a special boat for his daughter Allie, whose love of the sea is as strong and as vital as her father's. Now Allie has a boat that will take her to England solo, across the world's roughest seas, in search of her father's long-lost sister... Will the threads of Arthur's life finally come together?

"Lyrical and moving, it is one of the former Children's Laureate's best books for years." Amanda Craig, The Times

"His best book in years... I was completely hooked." Kate Kellaway, The Observer Review

"[A] very satisfying read... The masterful writing makes the characters come to life on the page... I'm recommending this to adult friends as well as teenagers." Books for Keeps

"This is storytelling at its best." Primary Times

GOR000755570
Alone on a Wide Wide Sea by Michael Morpurgo
Michael Morpurgo
Used - Very Good
Hardback
HarperCollins Publishers
2006-09-04
320
0007230567
9780007230563
Short-listed for Independent Booksellers' Week Book of the Year Award: Children's Book of the Year 2007
Book picture is for illustrative purposes only, actual binding, cover or edition may vary.
This is a used book - there is no escaping the fact it has been read by someone else and it will show signs of wear and previous use. Overall we expect it to be in very good condition, but if you are not entirely satisfied please get in touch with us.