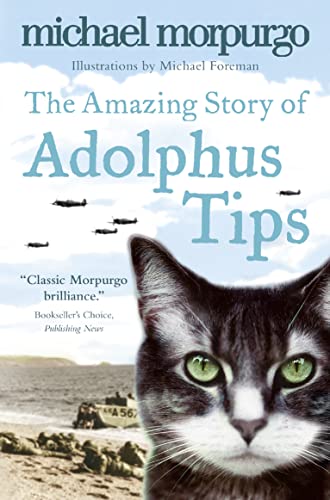 The Amazing Story of Adolphus Tips
by Michael Morpurgo

A heart-warming tale of courage and warmth, set against the backdrop of the second world war, about an abandoned village, a lifelong friendship and one very adventurous cat!
`Classic Morpurgo brilliance' - Publishing News

The Amazing Story of Adolphus Tips by Michael Morpurgo

A heart-warming tale of courage and warmth, set against the backdrop of the second world war, about an abandoned village, a lifelong friendship and one very adventurous cat!
`Classic Morpurgo brilliance' - Publishing News

"Something's up. Something big too, very big. At school, in the village, whoever you meet, it's all anyone talks about. It's like a sudden curse has come down on us all. It makes me wonder if we'll ever see the sun again."

It's 1943, and Lily Tregenze lives on a farm, in the idyllic seaside village of Slapton. Apart from her father being away, and the 'townie' evacuees at school, her life is scarcely touched by the war. Until one day, Lily and her family, along with 3000 other villagers, are told to move out of their homes - lock, stock and barrel.

Soon, the whole area is out of bounds, as the Allied forces practise their landings for D-day, preparing to invade France. But Tips, Lily's adored cat, has other ideas - barbed wire and keep-out signs mean nothing to her, nor does the danger of guns and bombs. Frantic to find her, Lily makes friends with two young American soldiers, who promise to help her. But will she ever see her cat again? Lily decides to cross the wire into the danger zone to look for Tips herself...

Now, many years later, as Michael is reading his Grandma Lily's diary, he learns about The Amazing Story of Adolphus Tips - and wonders how one adventurous cat could still affect their lives sixty years later.

"A master storyteller at his best" The Sunday Times

"From the first sentence of a Michael Morpurgo book, you know you are in the hands of a natural storyteller." Guardian

"...a succinctly engaging tear-jerker, it is also full of happiness and affection and has a joyful ending... It is also about people who care enough to look after each other, offering a lesson in life as well as history. Sunday Times, Children's Book of the Week

"As always, Morpurgo writes with solid confidence in a voice that's gentle yet spellbinding." Evening Standard

Tommo's journey from agricultural labourer to cannon fodder is movingly told...Michael Morpurgo is expert at getting through to his readers. He writes here about events that should never be forgotten nor forgiven, and does so most effectively. Independent

...full of warmth as well as grief, conveying vividly how precious it is to be alive... Sunday Times

The best novel he's written since The Butterfly Lion. The Times

Deserved to last as an insight into the First World War in the same way as, say, The Silver Sword or Goodnight Mr Tom. Telegraph

GOR000550067
The Amazing Story of Adolphus Tips by Michael Morpurgo
Michael Morpurgo
Used - Very Good
Paperback
HarperCollins Publishers
2006-02-06
192
0007182465
9780007182466
N/A
Book picture is for illustrative purposes only, actual binding, cover or edition may vary.
This is a used book - there is no escaping the fact it has been read by someone else and it will show signs of wear and previous use. Overall we expect it to be in very good condition, but if you are not entirely satisfied please get in touch with us.