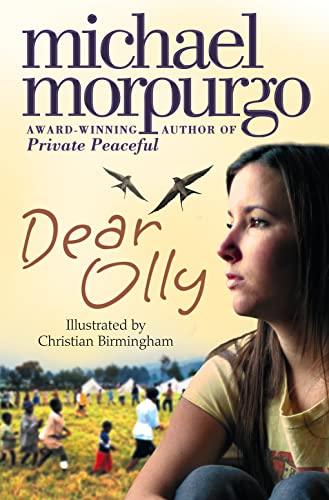 A moving story of a brother, a sister and a swallow, and how all are in some way victims of the horrors of landmines.

A moving story of a brother, a sister and a swallow, and how all are in some way victims of the horrors of landmines.

Olly's brother Matt wants to go and work with children who have been made orphans, through war, in Africa. He wants to be a clown and make them laugh. His mother and sister want him to stay in England and go to university.

Hero, a swallow, has a journey to make too. He must fly to Africa for the winter to join all the other swallows. His journey is difficult and fraught with danger.

Three separate stories are woven into one powerful and moving novel whose central theme not only exposes the horrors of war and of landmines, but also the endurance of the human spirit.

GOR010465812
Dear Olly by Michael Morpurgo
Michael Morpurgo
Used - Like New
Paperback
HarperCollins Publishers
2001-10-06
128
0006753337
9780006753339
N/A
Book picture is for illustrative purposes only, actual binding, cover or edition may vary.
This is a used book - there is no escaping the fact it has been read by someone else and it will show signs of wear and previous use. Overall we expect it to be in very good condition, but if you are not entirely satisfied please get in touch with us.