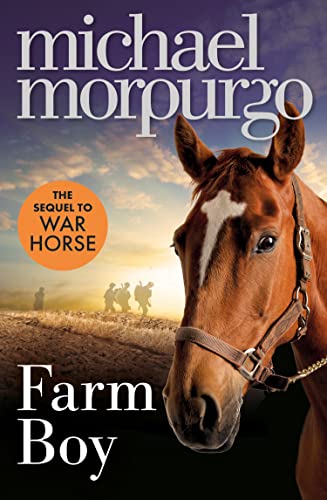 The magical sequel to `War Horse', soon to be a major motion picture.

The magical sequel to `War Horse', soon to be a major motion picture.

Joey was the last working horse on the farm, and the apple of Grandpa's eye. In War Horse, Joey was sent away from the farm to be a warhorse in WWI. Grandpa had joined the cavalry in order to find, and fight, with Joey. Farm Boy brings us forward fifty years with Grandpa not only telling his grandson, Joey's story but also a `shameful secret' which he has held for years...

The story is set in Iddesleigh in Devon and lovingly evokes the bonds between farm and farmer; grandson and grandfather. The spirit of rural life is superbly captured in both Michael Morpurgo's writing and Michael Foreman's illustrations. An irresistible title from acclaimed author-illustrator partnership.

`Here is a very important book, combining the very best of storytelling and illustration.'
JUNIOR EDUCATION

`If there are such things as contemporary classics, then this, surely is one of them.'
Daily Mail

Praise for SHADOW:
"As ever, Morpurgo's warmth and humanity suffuse a story of courage, love and hope." - Amanda Craig, The Times

Praise for AN ELEPHANT IN THE GARDEN:
"This is a handsome, very pickupable book. Brightly and informatively jacketed, its text punctuated by lovely, fluid ink and wash illustrations by Michael Foreman, it deserves a prominent place on school library bookshelves and, if there is any justice in the world, in bookshops."
Guardian

"A thrilling and moving new novel about an extraordinary animal caught up in a very human war, for anyone who loved The Amazing Story of Adolphus Tips or The Butterfly Lion!" Waterstones

"For readers aged eight and over, this captivating novel offers an insight into how Hitler came to power, refracted through the gaze of the young narrator."
Telegraph

"Following the stage success of War Horse, Michael Morpurgo returns with another gem in his animals in war series, An Elephant in the Garden."
Telegraph

GOR003560479
Farm Boy by Michael Morpurgo
Michael Morpurgo
Used - Very Good
Paperback
HarperCollins Publishers
2011-09-29
112
0007450656
9780007450657
N/A
Book picture is for illustrative purposes only, actual binding, cover or edition may vary.
This is a used book - there is no escaping the fact it has been read by someone else and it will show signs of wear and previous use. Overall we expect it to be in very good condition, but if you are not entirely satisfied please get in touch with us.