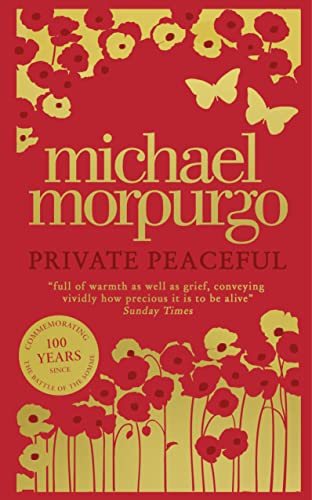 A stunning new edition of this modern classic of World War One, featuring a new introduction by the author and insightful testimonies from soldiers, to commemorate the centenary of the Battle of the Somme.

A stunning new edition of this modern classic of World War One, featuring a new introduction by the author and insightful testimonies from soldiers, to commemorate the centenary of the Battle of the Somme.

Told in the voice of Private Tommo Peaceful, the story follows twenty-four hours at the front, and captures his memories of his family and his village life - by no means as tranquil as it appeared.

Full of vivid detail and engrossing atmosphere, leading to a dramatic and moving conclusion, Private Peaceful is both a compelling love story and a deeply moving account of the First World War.

"His [Tommo's] journey from agricultural labourer to cannon fodder is movingly told... Michael Morpurgo is expert at getting through to his readers. He writes here about events that should never be forgotten nor forgiven, and does so most effectively." Independent

"Full of warmth as well as grief, conveying vividly how precious it is to be alive" Sunday Times

"The best novel he's written since The Butterfly Lion." Times

"Deserved to last as an insight into the First World War in the same way as, say, The Silver Sword or Goodnight Mr Tom." Telegraph

GOR009942647
Private Peaceful by Michael Morpurgo
Michael Morpurgo
Used - Good
Hardback
HarperCollins Publishers
2016-05-23
208
0008191743
9780008191740
N/A
Book picture is for illustrative purposes only, actual binding, cover or edition may vary.
This is a used book - there is no escaping the fact it has been read by someone else and it will show signs of wear and previous use. Overall we expect it to be in very good condition, but if you are not entirely satisfied please get in touch with us.