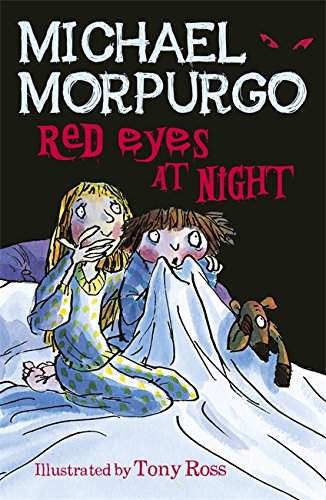 In Stock
£3.99
Millie's cousin Geraldine is such a goody-two-shoes. Millie has had enough! So she hatches a plan to scare Geraldine out of her wits. Perhaps then she will be a bit nicer to live with...
Very Good Good
5 in stock

Millie's cousin Geraldine is a show-off and a pain. So Millie plots revenge. She tells Geraldine about the ghost with red eyes who lives in the garden shed and comes out at night - but manages to scare herself silly in the process! Everyone is furious, but Millie and Geraldine end up the best of friends!

A brilliant story about making friends with a funny, slightly spooky twist.

Michael Morpurgo has written more than 60 books for every age group. The Wreck of Zanzibar won the Carnegie Medal in 1996. The Butterfly Lion (Collins) won the Smarties Gold Award. He has been short listed for all the major awards, with King of Cloud Forest, War Horse, My Friend Walter (all Mammoth), to name but a few. Kensuke's Kingdom (Egmont) won the Children's Book Award in 2000. Tony Ross was born in London and studied at the Liverpool School of Art and Design. He has worked as a cartoonist, a graphic designer, as the Art Director of an advertising agency, and as Senior Lecturer in Art at Manchester Polytechnic. Tony is one of the most popular and successful children's illustrators of all time, best known for illustrating Horrid Henry and the works of David Walliams. Tony's books have been translated into 40 languages in over 100 countries. He lives in Macclesfield.

GOR000964049
Red Eyes At Night by Michael Morpurgo
Michael Morpurgo
Used - Very Good
Paperback
Hachette Children's Group
1998-01-14
96
0340687533
9780340687536
N/A
Book picture is for illustrative purposes only, actual binding, cover or edition may vary.
This is a used book - there is no escaping the fact it has been read by someone else and it will show signs of wear and previous use. Overall we expect it to be in very good condition, but if you are not entirely satisfied please get in touch with us.