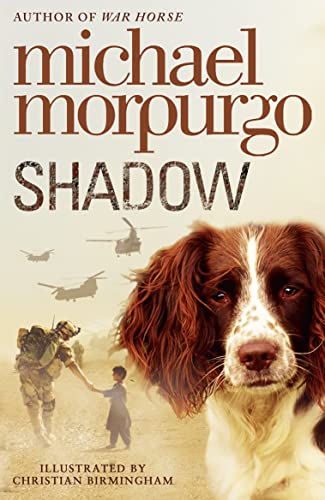 A powerful novel from Michael Morpurgo, the nation's favourite storyteller...

A powerful novel from Michael Morpurgo, the nation's favourite storyteller...

Never have Aman and his mother needed a friend more than when a Springer Spaniel appears - thin and war-ravaged - in the mouth of their Afghan cave. Nursed back to health by Aman, the dog becomes a constant companion, a shadow, and that's what Aman decides to call her.

But life in Afghanistan becomes more dangerous by the moment. Eventually, Aman, his mother and Shadow find the courage to embark upon the treacherous journey from war-torn Afghanistan to the safely of a relative's home in Manchester, England.

But how far can Shadow lead them? And in this terrifying new world, is anywhere really safe...?

"As ever, Morpurgo's warmth and humanity suffuse a story of courage, love and hope." - Amanda Craig in the Times

GOR008725754
Shadow by Michael Morpurgo
Michael Morpurgo
Used - Like New
Paperback
HarperCollins Publishers
2011-09-29
288
0007339615
9780007339617
N/A
Book picture is for illustrative purposes only, actual binding, cover or edition may vary.
This is a used book - there is no escaping the fact it has been read by someone else and it will show signs of wear and previous use. Overall we expect it to be in very good condition, but if you are not entirely satisfied please get in touch with us.