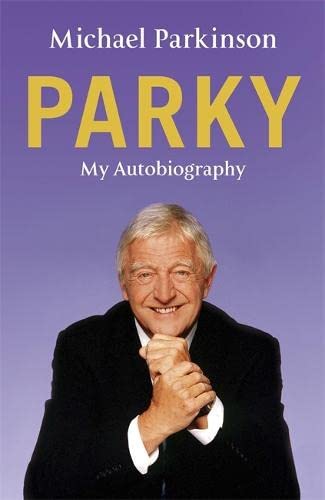 Parky - My Autobiography
by Michael Parkinson

In Stock
£4.49
The long-awaited autobiography of one of Britain's national icons.
Like New Very Good
10 in stock

Parky - My Autobiography: A Full and Funny Life by Michael Parkinson

From prize-winning journalist to chat show king on a show voted one of the top ten British TV programmes of all time, Michael Parkinson's starry career spans over four decades.
Now an international celebrity himself, the man from a humble but colourful Yorkshire mining family who can tease out the secrets of even the most reticent star guest, at last reveals his own story, with the easy manner and insight that has kept his audiences fascinated.
His distinguished career has involved working on highly acclaimed current affairs and film programmes. His wide interests and expertise include jazz, film, football and cricket.
Witty, humorous and blessed with exceptional intellectual clarity, Michael Parkinson's memoir is a joy to read.

I recommend it heavily. It's a wonderful book * Melvyn Bragg *
Parky's book is a joyous, breezy read, as much for the improbability of his early escapades as for his backstage anecdotes about the stars. It is also beautifully written * Daily Telegraph *
The early chapters about his childhood and early career ... are disarmingly modest and offer a proper glimpse into another world * Independent *
Crisp and detailed prose ... with an especially impressive account of a pre-second world war childhood in the north * Mark Lawson, Guardian *
Funny and self-deprecating and just as laid-back as he is on camera * Boyd Tonkin, Independent *
This autobiography is just like an extended edition of a brilliant Parkinson on television - engrossing and entertaining * Irish Times *

Born in Yorkshire, Michael Parkinson left school at sixteen with the ambition to play cricket for Yorkshire and England and to write about cricket for the Manchester Guardian. Although, he didn't manage to fulfil the first half of his ambition, he has since become one of the most successful journalists of his generation. He wrote a sports column for The Sunday Times for fifteen years and has also written for the Telegraph. He is also a legendary TV and radio presenter - his long-running chat show Parkinson was hugely popular for many years.

GOR000570238
Parky - My Autobiography: A Full and Funny Life by Michael Parkinson
Michael Parkinson
Used - Very Good
Hardback
Hodder & Stoughton
2008-10-02
400
034096166X
9780340961667
N/A
Book picture is for illustrative purposes only, actual binding, cover or edition may vary.
This is a used book - there is no escaping the fact it has been read by someone else and it will show signs of wear and previous use. Overall we expect it to be in very good condition, but if you are not entirely satisfied please get in touch with us.