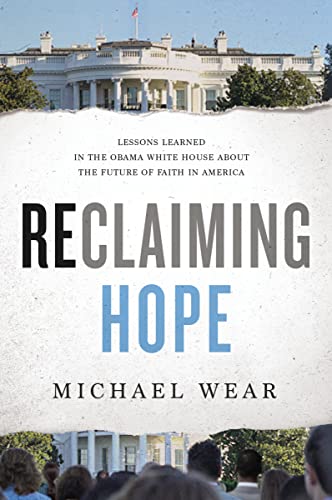 In Stock
£4.49
An eye-opening, inside-story of faith and politics in the White House.
Very Good Good
Only 2 left

Reclaiming Hope: Lessons Learned in the Obama White House About the Future of Faith in America by Michael R. Wear

"An important and extremely timely book...Get it, read it, and talk to others about it." --Timothy Keller.

In this unvarnished account of faith inside the world's most powerful office, Michael Wear provides unprecedented insight into the highs and lows of working as a Christian in government. Reclaiming Hope is an insider's view of the most controversial episodes of the Obama administration, from the president's change of position on gay marriage and the transformation of religious freedom into a partisan idea, to the administration's failure to find common ground on abortion and the bitter controversy over who would give the benediction at the 2012 inauguration.

The book is also a passionate call for faith in the public square, particularly for Christians to see politics as a means of loving one's neighbor and of pursuing justice for all. Engrossing, illuminating, and at time provocative, Reclaiming Hope changes the way we think about the relationship of politics and faith.

"A pre-Trump book with serious questions for our politics in the age of Trump...More necessary than ever before." -- Sojourners

"Should be read by Democrats and Republicans, liberals and conservatives, and all who are concerned by the state of our politics." --Kirsten Powers, USA Today columnist and CNN political analyst

"An important contribution in this age of religious and political polarization." --J.D. Vance, author of Hillbilly Elegy

"A lifeline for these times." --Ann Voskamp, author of One Thousand Gifts and The Broken Way

"We can hope, and this book can help us." --Russell Moore, president of the Ethics & Religious Liberty Commission of the Southern Baptist Convention

Michael Wear is the founder of Public Square Strategies LLC, a consulting firm that helps businesses, non-profits, foundations, and Christian organizations at the intersection of faith, politics, and culture. Wear directed faith outreach for President Obama's historic 2012 re-election campaign and was one of the youngest White House staffers in modern American history, leading evangelical outreach and helping manage the White House's engagement on religious and values issues, including adoption and anti-human trafficking efforts. He holds an honorary position at the University of Birmingham's Edward Cadbury Centre for the Public Understanding of Religion, and serves on the national board of Bethany Christian Services. He lives with his wife, Melissa, in Washington, DC.

GOR008636068
Reclaiming Hope: Lessons Learned in the Obama White House About the Future of Faith in America by Michael R. Wear
Michael R. Wear
Used - Very Good
Hardback
Thomas Nelson Publishers
2017-02-23
304
071808232X
9780718082321
N/A
Book picture is for illustrative purposes only, actual binding, cover or edition may vary.
This is a used book - there is no escaping the fact it has been read by someone else and it will show signs of wear and previous use. Overall we expect it to be in very good condition, but if you are not entirely satisfied please get in touch with us.