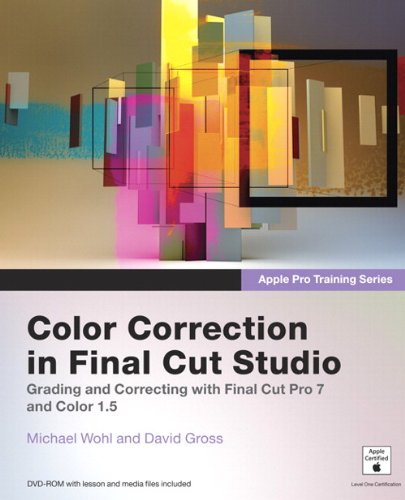 This comprehensive guide starts out with primary correction in Final Cut Pro 7 and moves on to the fine points of secondary grading and color effects in Color 1.5. Revised with remarkable clips from TNT's hit show Leverage as well as HD footage shot around the world, the book takes you step by step through Color's new features, including 4K and RED workflows and improved round-trip integration with Final Cut Pro. Topics include color balancing, scene matching, using keys and vignettes to isolate and grade regions, applying advanced color effects, adjusting the composition and framing of a shot, tracking and keyframing, grade management, and advanced workflows. A special chapter on creating specific "looks" offers recipes for some of the most
useful grades in a colorist's toolbox.

Michael Wohl is an award-winning filmmaker who has written, directed, and edited independent films for more than fifteen years. As part of the original Final Cut Pro engineering team, he helped design the workflow and interface that has earned Final Cut Pro its award-winning reputation. As an instructor, Michael teaches and designs curricula at UCLA, and has taught at AFI and San Francisco State University. Has spoken at fi lm festivals and conferences including Sundance Film Festival, South by Southwest, Cinequest, DV Expo, Macworld, and NAB. His books include Apple Pro Training Series: Final Cut
Pro 7: Beyond the Basics and Apple Pro Training Series: The Craft of Editing with Final Cut Pro.

GOR004684340
Apple Pro Training Series: Color Correction in Final Cut Studio by Michael Wohl
Michael Wohl
Apple Pro Training
Used - Very Good
Hardback
Pearson Education (US)
2009-08-25
456
0321635280
9780321635280
N/A
Book picture is for illustrative purposes only, actual binding, cover or edition may vary.
This is a used book - there is no escaping the fact it has been read by someone else and it will show signs of wear and previous use. Overall we expect it to be in very good condition, but if you are not entirely satisfied please get in touch with us.