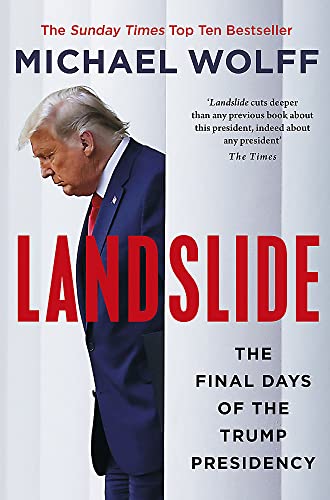 New York Times bestselling author of Fire and Fury and Siege completes the trilogy on the epic presidency of Donald J. Trump

Landslide: The Final Days of the Trump Presidency by Michael Wolff

'Landslide cuts deeper than any previous book about this president, indeed about any president' The Times

'Required reading for anyone who fears for American democracy' Guardian

Politics has given us some shocking and confounding moments but none have come close to the careening final days of Donald Trump's presidency: the surreal stage management of his re-election campaign, his audacious election challenge, the harrowing mayhem of the storming of the Capitol and the buffoonery of the second impeachment trial. But what was really going on in the inner sanctum of the White House during these calamitous events? What did the president and his dwindling cadre of loyalists actually believe? And what were they planning?

Drawing on an exclusive and wide range of sources who took part in or witnessed Trump's closing moments, Michael Wolff finds the Oval Office more chaotic and bizarre than ever before, a kind of Star Wars bar scene. At all times of the day, Trump, hunched behind the Resolute desk, is surrounded by schemers and unqualified sycophants who spoon-feed him the 'alternative facts' he hungers to hear - about COVID-19, Black Lives Matter protests, and, most of all, his chance of winning re-election.

In this extraordinary telling of a unique moment in history, Wolff gives us front row seats as Trump's circle of plotters whittles down to the most enabling and the least qualified - and the president overreaches the bounds of democracy, entertaining the idea of martial law and balking at calling off the insurrectionist mob that threatens the hallowed seat of democracy itself.

Michael Wolff pulled back the curtain on the Trump presidency with his globally bestselling blockbuster Fire and Fury. Now, in Landslide, he closes the door on the presidency with a final, astonishingly candid tale.

Michael Wolff's third Trump book is his best - and most alarming ... Fire and Fury infuriated a president and fuelled a publishing boom. Its latest sequel is required reading for anyone who fears for American democracy. * Guardian *
If Donald Trump seems like a distant, bad dream, Michael Wolff's pacily readable account of his last months as president warns that we shouldn't write him off yet. This is the US journalist's third book on the Trump administration - after Fire and Fury and Siege - and it uncovers new depths of dysfunction there. * Evening Standard *
The strength of Landslide comes less from these stories and more from a coherent argument that Wolff, in partnership with his sources, makes about how we should understand the period between Nov. 3 and Jan. 20. * New York Times *
Wolff's previous books on this president - Fire and Fury and Siege - titillated us with inside tales from a dysfunctional White House; terrified us a bit with gut-wrenching episodes of Diet Pepsi-fuelled craziness. They were warm-up acts. Low energy in comparison. Now we get the real deal. Landslide cuts deeper than any previous book about this president, indeed about any president. * The Times *
[Wolff] provides a seamless, cinematic narrative of unfolding events in the White House, as if he was quietly sitting in the corner, unnoticed, taking notes, with some preternatural insight into the innermost thoughts of all the protagonists .... Cruel, unforgiving, muckraking, scandalous. I couldn't stop reading it. * Telegraph *
Michael Wolff is the author of two books about the Trump White House, Fire and Fury and Siege. His six other books include a biography of Rupert Murdoch, The Man Who Owns the News, and his memoir of the early internet years, Burn Rate. He has been a regular columnist for New York magazine, Vanity Fair, British GQ, the Hollywood Reporter, and the Guardian. The winner of two National Magazine Awards, he lives in New York City with his family.
NGR9781408714645
9781408714645
1408714647
Landslide: The Final Days of the Trump Presidency by Michael Wolff
Michael Wolff
New
Hardback
Little, Brown Book Group
20210713
336
N/A
Book picture is for illustrative purposes only, actual binding, cover or edition may vary.
This is a new book - be the first to read this copy. With untouched pages and a perfect binding, your brand new copy is ready to be opened for the first time
Trustpilot