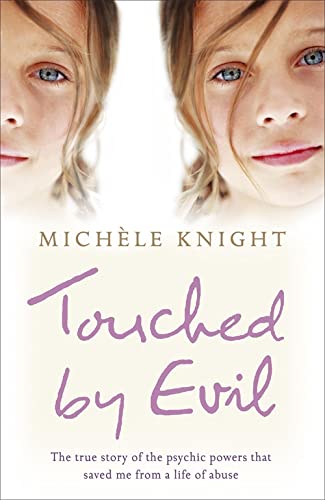 Touched by Evil
by Michele Knight

In Stock
£5.99
The harrowing but ultimately inspirational story of a little girl who was beaten, raped, neglected and despised, but rescued from despair by an angel - her twin sister Lucy.
Very Good Good
9 in stock

Touched by Evil by Michele Knight

Michele's childhood was a nightmare. Her mother was a gifted psychic but highly unstable, unable to control the dark forces her powers unleashed or to look after Michele. When she was six her beloved father died and the last shreds of normality were gone forever. From then on Michele was at the mercy of sexual predators and her mother's violent lovers. Evil surrounded her...

Her twin sister Lucy was constantly at her side, comforting her, chasing away the demons and even saving her life on several occasions.

Lucy had died when the twin girls were babies. But her spirit stayed behind to watch over her little sister. Time and again, when Michele reached her darkest hour, Lucy reached out with a deep sense of love and gently guided her to safety.
This is the heartbreaking, but ultimately inspirational story of a little girl, who was beaten, raped, neglected and despised, but rescued from despair by an angel.

Michele Knight developed her natural psychic abilities as a child, learning from her mother Bruna, a gifted psychic. The author of three books, Michele is an astrologer for the Mirror and Look magazine, a psychic advisor on Channel 5's Housebusters, and the resident psychic on X Factor Xtra and the BBC's Strictly Dance Fever. She lives with her partner and son Julien in Somerset.

GOR001155695
Touched by Evil by Michele Knight
Michele Knight
Used - Very Good
Paperback
Hodder & Stoughton General Division
2008-10-16
448
034095129X
9780340951293
N/A
Book picture is for illustrative purposes only, actual binding, cover or edition may vary.
This is a used book - there is no escaping the fact it has been read by someone else and it will show signs of wear and previous use. Overall we expect it to be in very good condition, but if you are not entirely satisfied please get in touch with us.