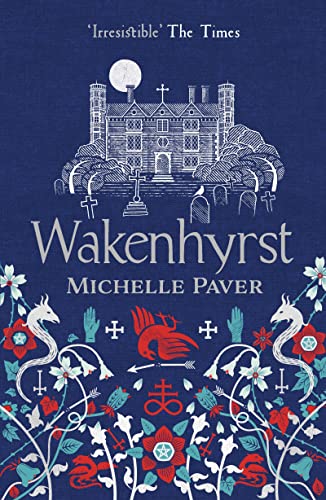 Spanning five centuries, this is a darkly gothic thriller about murderous obsession and one girl's longing to fly free.

A Times Best Book of 2019. 'Paver is one of Britain's modern greats. This sinister, gothic chiller shows why' BIG ISSUE, Books of the Year 2019.

"Something has been let loose..."

In Edwardian Suffolk, a manor house stands alone in a lost corner of the Fens: a glinting wilderness of water whose whispering reeds guard ancient secrets. Maud is a lonely child growing up without a mother, ruled by her repressive father.

When he finds a painted medieval devil in a graveyard, unhallowed forces are awakened.

Maud's battle has begun. She must survive a world haunted by witchcraft, the age-old legends of her beloved fen - and the even more nightmarish demons of her father's past.

Spanning five centuries, Wakenhyrst is a darkly gothic thriller about murderous obsession and one girl's longing to fly free by the bestselling author of Dark Matter and Thin Air. Wakenhyrst is an outstanding new piece of story-telling, a tale of mystery and imagination laced with terror. It is a masterwork in the modern gothic tradition that ranges from Mary Shelley and Bram Stoker to Neil Gaiman and Sarah Perry.

'[Michelle Paver's] storytelling is irresistible' The Times, Historical Fiction Book of the Month.
'It's a ghost story to put beside the classics of an earlier era ... Compelling' Evening Standard.
'Original and engrossing ... Paver masterfully blends together two narratives ... Spanning fen devils, mystics and the lot of women in Edwardian England' Observer.
'This book has been haunting me ... Very gripping' BBC Radio 2 Book Club.
'[A] superb, supernatural novel ... Paver deliciously ratchets up the tension as Maud struggles for autonomy in the face of her father's deranged obsessions' Daily Mail.
'A brilliantly atmospheric read (be warned: it's also terrifying!) with a brave, forward-thinking heroine I loved' Good Housekeeping.
'Paver is back on top form' The Bookseller, Editor's Choice.
'A spine-chilling masterpiece' Woman and Home.
'This dark, gothic tale will hook you in with its atmospheric setting of a house on the edge of the Suffolk fens, and its themes of superstition, witchcraft and religion' Sun.
'Wakenhyrst is many things all at once - a chilling Gothic horror, a coming of age tale, a story of madness and loneliness, and most of all an account of how one girl manages to look out for herself when no-one else will. Paver successfully balances these themes as only a confident writer can. With fully realised characters and motivations, she draws you deeper and deeper into the story, even as the sense of dread grows stronger with every turn of the page' Scotland on Sunday.
'Dark, atmospheric and beautifully written' Candis.
'This perfectly constructed "modern Gothic" is laced with a real sense of menace - and a healthy dose of feminism' Heat.
'A demonic presence lurks in the fens in this tale about murder, loneliness and an abusive relationship' The Times, The Best Books of 2019.
'This is true goose-bump material' 8/10, Sunday Post.
'This dark, gothic tale will hook you in with its atmospheric setting' Fabulous Magazine.
'Gothic thriller spanning five centuries. A woman living with her repressive father faces a battle against witchcraft and sorcery when a strange icon is discovered in a churchyard' Love It Magazine.
'There is a thick air of mystery to the story. The household is shrouded in secrets. I really liked the sinister, gothic feel I got from Wakenhyrst and I'll be looking out for more!' A Knight's Reads.
'Paver herself said it was the best book she's written, and you can see why: it's compulsively readable and savagely intelligent' The Roaring Bookworm.
'This book is steeped in atmosphere as well as the stench and slime of the fen itself, a place barely touched by the outside world, and it is beautifully written and deliciously, gorgeously creepy' For Winter Nights.
'A clever, creepy Gothic tale' Saga.

Michelle Paver was born in Central Africa but came to England as a child. After gaining a degree in Biochemistry from Oxford University she became a partner in a city law firm, but eventually gave that up to write full time. She is the bestselling author of the adult gothic novels Dark Matter and Thin Air and the prizewinning children's series Chronicles of Ancient Darkness, which has sold over three million copies worldwide.

GOR010189418
Wakenhyrst by Michelle Paver
Michelle Paver
Used - Like New
Paperback
Head of Zeus
2019-10-31
368
1788549570
9781788549578
N/A
Book picture is for illustrative purposes only, actual binding, cover or edition may vary.
The book has been read, but looks new. The book cover has no visible wear, and the dust jacket is included if applicable. No missing or damaged pages, no tears, possible very minimal creasing, no underlining or highlighting of text, and no writing in the margins.