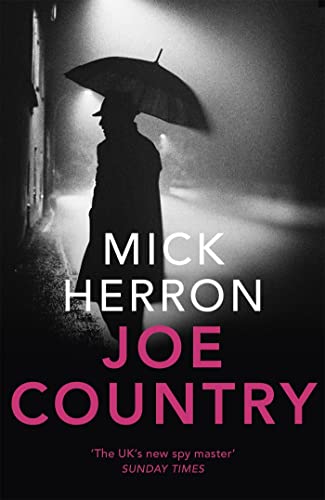 SHORTLISTED FOR THE THEAKSTON OLD PECULIER CRIME NOVEL OF THE YEAR

LONGLISTED FOR THE CWA GOLD DAGGER

'Mick Herron is fast becoming the go-to author for British espionage, and the sixth novel in his Slough House series, Joe Country, is up to his usual high standard' Guardian

In Slough House memories are stirring, all of them bad. Catherine Standish is buying booze again, Louisa Guy is raking over the ashes of lost love, and new recruit Lech Wicinski, whose sins make him outcast even among the slow horses, is determined to discover who destroyed his career, even if he tears his life apart in the process.

And with winter taking its grip Jackson Lamb would sooner be left brooding in peace, but even he can't ignore the dried blood on his carpets. So when the man responsible breaks cover at last, Lamb sends the slow horses out to even the score.

This time, they're heading into joe country.

And they're not all coming home.

Herron does not seek to be John le Carre - his is a wryer, more ironic style; faster, more down to earth, with rapid prose that grabs you by the throat. If you haven't read him yet, do so now * Daily Mail *
The best thriller writer in Britain today * Daily Express *
This series is bitingly intelligent, light of touch and frequently hilarious * Observer *
Mick Herron is fast becoming the go-to author for British espionage . . . Aficionados can expect Herron's trademark snappy dialogue, memorably flawed characters and sharp political observation * Guardian *
Herron is superior to the vast majority of thriller writers at their best, and there's no shortage here of reliable treats ranging from messy, inept gunfights to brutally sarcastic dialogue * Sunday Times *
Every bit as captivating as its predecessors . . . like a pin-sharp sitcom that happens to include murder and high politics, they purr along on the gracelessness and ineptitude of the self-deluding Slow Horses, the unmatchable Lamb, and the crackling writing that has made all six in the series unmissable * Big Issue *
A delight - an ingeniously plotted thriller, delivered in bone dry, sublimely sardonic style * Sunday Mirror *
Herron's morbidly witty backdrop hosts incisive storytelling with a rich mix of engaging characters * Financial Times *
Well observed, angry and deeply sad, Joe Country is fundamentally about injustice . . . It is a rare novelist who can make such unrelenting misery so funny * TLS *
Mick Herron's Slough House spy thrillers are by now, one of the least well-kept secrets in espionage fiction. Everyone with even half an eye on the genre knows he is somewhere near the top . . . Herron is a fine, often glorious sentence-by-sentence writer, and fiercely funny with his dialogue . . . a hugely satisfying addition to the series * Literary Review *
Herron's running jokes with language are part of the fun, and his corpulent, politically incorrect and scatalogically creative eminence noir Jackson Lamb is the icing on the cake * The Times *
If you haven't yet immersed yourself in the world of Slough House, the arena for Herron's jaded and thoroughly imperfect spies, you've a treat in store . . . Combining espionage, ennui and deadpan humour, they set a new bar for spy fiction * FT, Books of the Year *
A complex, accomplished novel by the best thriller writer in Britain today * Daily Express, Books of the Year *

GOR010327837
Joe Country: Jackson Lamb Thriller 6 by Mick Herron
Mick Herron
Jackson Lamb Thriller
Used - Very Good
Paperback
John Murray Press
2020-02-06
352
1473657482
9781473657489
Short-listed for Theakston Old Peculiar Crime Novel of the Year 2020 (UK) Long-listed for CWA Daggers: Gold 2020 (UK)
Book picture is for illustrative purposes only, actual binding, cover or edition may vary.
This is a used book - there is no escaping the fact it has been read by someone else and it will show signs of wear and previous use. Overall we expect it to be in very good condition, but if you are not entirely satisfied please get in touch with us.