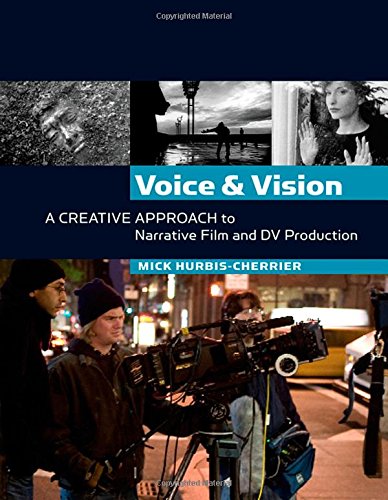 In Stock
£5.99
A manual for the independent filmmakers and film students who want a grounding in the tools, techniques, and processes of narrative film in order to achieve their artistic vision. It includes information on relevant film and digital video tools, an overview of the filmmaking stages, and the aesthetic considerations for telling a visual story.
Very Good
Only 1 left

Voice and Vision: A Creative Approach to Narrative Film and DV Production Summary

Voice & Vision is a comprehensive manual for the independent filmmakers and film students who want a solid grounding in the tools, techniques, and processes of narrative film in order to achieve their artistic vision. This book includes essential and detailed information on relevant film and digital video tools, a thorough overview of the filmmaking stages, and the aesthetic considerations for telling a visual story.

The ultimate goal of this book is to help you develop your creative voice while acquiring the solid practical skills and confidence to use it. Unlike many books that privilege raw technical information or the line-producing aspects of production, Voice & Vision places creativity, visual expression, and cinematic ideas front and center. After all, every practical decision a filmmaker makes, like choosing a location, an actor, a film stock, a focal length, a lighting set-up, an edit point, or a sound effect is also an expressive one and should serve the filmmaker's vision. Every decision, from the largest conceptual choices to the smallest practical solutions, has a profound impact on what appears on the screen and how it moves an audience.

"In Practice" sidebars throughout Voice & Vision connect conceptual, aesthetic and technical issues to their application in the real world. Some provide a brief analysis of a scene or technique from easily rentable films which illustrate how a specific technology or process is used to support a conceptual, narrative, or aesthetic choice. Others recount common production challenges encountered on real student and professional shoots which will inspire you to be innovative and resourceful when you are solving your own filmmaking challenges.

Voice and Vision: A Creative Approach to Narrative Film and DV Production Reviews

"For those filmmakers who want to learn more about the technicalities of film and DV production, this is the book you've been waiting for. Written in a way that is educational yet easy-to-understand, you will find this book helpful whether you're a new filmmaker or one with some experience under your belt. Regardless of your budget size, or your preference for film/DV, there is an incredible amount of information to learn here. The book's layout and detailed illustrations make it easy to follow and enjoyable to read, while the depth of information--as well as the topics themselves--ensure that this book will be usable for quite awhile after its purchase. The price is excellent, espcially considering the amount of information the book contains, as well as its reusability. A must-have for the filmmaker who wants to take his education to the next level!" - Microfilmmaker Magazine

"I've adopted the textbook for my film production class and I have to tell you I have not come across a better one. ... I'm continually thrilled when I discover yet another piece that is ideal for teaching not just the mechanics of film making, but the impact on cinematic storytelling. Too many textbooks leave out the 'why' when explaining production. It's easy to get sidetracked into explaining technical details, but unless you can explain its relevance to the story, why teach it?" -Hamp Overton, Assistant Professor - University of New Orleans

"With Voice and Vision, Mick Hurbis-Cherrierhas written a ground-breaking book that approaches the subject as a technical, narrative, creative endeavor that marries a filmmaker's voice to his/her mise en scene. It is a book that is compelling and exciting as it distills essential information about film and digital image-making tools with the aesthetic wisdom of many of the world's greatest storytellers. It is quite simply the best book of its kind on the market today." - Film Festival Today

"A concise, graphic, and comprehensive manual for the serious beginning filmmaker--full of practical, technical information and solid artistic guidance, and some inspiration too."
-Michael Rabiger, Author of "Directing: Film Techniques and Aesthetics and Directing the Documentary"

"Hurbis-Cherrier takes years of teaching film and video production and puts it all down on paper in 'Voice and Vision,' combining technical and aesthetic applications with a realistic approach to filmmaking. It is a comprehensive guide for aspiring filmmakers working in both film and digital video." -Jacqueline B. Frost, Associate Professor, Department of Radio-TV-Film, California State University, Fullerton

"Mick Hurbis-Cherrier has written a very unusual book for film and video makers. The book,Voice and Vision,differs from other production books by seeing production as a technical,narrative,creative undertaking that is unique because each filmmaker has a distinct voice.This book transends 'how to' and invites the creative 'why-not' of its readers. I've never read a better beginning to the film and videomaking journey." -Ken Dancyger, Professor at New York University's Kanbar Institute of Film & Television and Author of "Broadcast Writing," "Alternative Scriptwriting," "The Technique of Film and Video Editing" and "Writing the Short Film."

"It feels like sitting in a classroom with a great teacher, who supplements key information with wonderfully entertaining and illustrative stories...students will feel more like they are reading a good story rather than trying to wade through a textbook." -Andrew Lund, Filmmaker and Graduate Film Professor, Columbia University

"The discussion of the technical and logistic matters is very good: it is comprehensive, thorough, and very well explained." -Michael Kowalski, Film Professor, Chapman University, and Sound Designer on "Lost In La Mancha"

"Mick Hurbis-Cherrier teaches film and video production at Hunter College in New York, and has worked as a producer, director, cinematographer and editor. He knows what he's talking about, and has presented it in a beautifully illustrated and photographed book that should be a required textbook in every film school." --Jon Fauer, ASC, Film and Digital Times

"This text is not in the form of a technical manual to be shelved as a reference book but is instead a production bible and reader for those actively involved in filmmaking. This book is immensely readable for, and useable by, the target audience of non-professional filmmakers, although even a professional may find it a useful contemporary addition to their library." - Sorrel Penn-Edwards, Metro Magazine

Mick Hurbis-Cherrier has been teaching all levels of film and video production at Hunter College in New York City for more than a decade. He works professionally in both film and video and has performed a wide range of duties on films, including producing, writing, directing, cinematography, and editing. His films and videos have been shown around the country and have garnered prizes in many festivals.

Acknowledgments; Introduction; PART I: DEVELOPING YOUR FILM ON PAPER; From Idea to Cinematic Story; The Screenplay; The Visual Language and Aesthetics of Cinema; Organizing Time and Space; From Screenplay to Visual Plan; PART II: PREPARING FOR PRODUCTION; Preparing for Production; The Cast and Crew;
PART III: TOOLS AND TECHNIQUES: PRODUCTION; The Film System; The Digital Video System; The Lens; Camera Support; Basics of Exposure; Basic Lighting for Film and DV; Advanced Lighting and Exposure; Sound for Production; Production Sound Tools; Sound Recording Technique; On Set!; PART IV: TOOLS AND TECHNIQUES: POST-PRODUCTION; Post-Production Overview and Workflow; Principles and Process of Digital Editing; The Art and Technique of Editing; The Sound Design in Film; Cutting Sound and Working with Multiple Tracks; Finishing, Mastering and Distribution; Appendix; Bibliography; Glossary