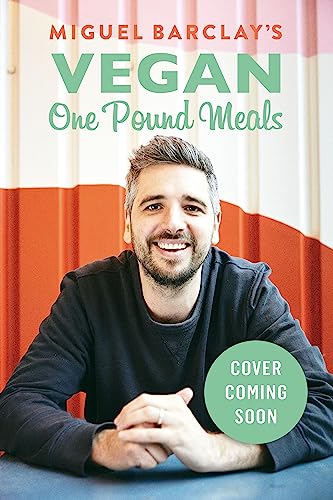 Over 85 quick, delicious, and budget-friendly vegan recipes from the bestselling One Pound Chef.

Vegan One Pound Meals: Delicious budget-friendly plant-based recipes all for GBP1 per person by Miguel Barclay

Minimum fuss, maximum flavour, fully vegan and all for GBP1 per person.

Miguel Barclay's One Pound Meals, became the bestselling debut cookbook of 2017. Vegan One Pound Meals, his fourth book in the series focusses on vegan recipes, with Miguel showing just how accessible it can be to eat vegan meals on a budget, with each recipe costing just GBP1 per portion.

You might think that it's expensive to change your diet to a vegan one, but Miguel will show you that it's entirely do-able on a tiny budget. Once again, through his ingenious recipes, he will bring delicious food to your table without the expense.

There's over 85 recipes to choose from, including:

Eating plant-based food has never been more popular and you don't have to spend a fortune on ingredients. [Miguel's] philosophy is minimum fuss, maximum flavour. * Fabulous, The Sun *
Buy a few basics, and each of these recipes should come in under a pound a head. * Guardian *
Easy plant-based meals for GBP1 a head! * Closer magazine *
These clever vegan recipes are ideal for everyday budget family cooking. * BBC Good Food *
An absolute must for anyone cooking on a budget, proving that delicious meals can be made with limited money and time. * Rhian Williams, Independent *
Restaurant-quality meals for GBP1 a head. * Sainsbury's Magazine *
Delicious GBP1 dinners! * Bella *
As delicious to eat as they were quick to prepare. * The Times *
Cook up a storm for less. * The Sun *
Cook yourself a bargain... genuinely delicious stuff you'll want to eat. * Metro *
As an Instagram chef, Miguel Barclay's dishes always look amazing, but what has caused such a buzz is the fact that they all cost less than GBP1 per person! From his kitchen in Camden, Miguel is constantly experimenting with breaking down recipes and coming up with innovative new GBP1 creations. Through his One Pound Meals phenomenon, Miguel is giving youthe confidence and motivation to change the way you cook for ever. Miguel's first book, One Pound Meals became the biggest debut cookbook of the year and a Sunday Times Manuals chart bestseller. Fast & Fresh One Pound Meals, Miguel's second book also became an online bestseller as OPM fans devoured his new collection of recipes. Widely covered by the print media, Miguel and his One Pound Meals revolution has been featured by The Times, the Mail, Fabulous mag in the Sun, Metro, Independent and many more. Miguel has also cooked live on This Morning as well as BBC London News and is now a popular face at foodie festivals throughout the UK. Follow Miguel on Instagram and Twitter @miguelbarclay #onepoundmeals
GOR009842339
9781472263728
1472263723
Vegan One Pound Meals: Delicious budget-friendly plant-based recipes all for GBP1 per person by Miguel Barclay
Miguel Barclay
Used - Very Good
Paperback
Headline Publishing Group
2019-04-18
208
N/A
Book picture is for illustrative purposes only, actual binding, cover or edition may vary.
This is a used book - there is no escaping the fact it has been read by someone else and it will show signs of wear and previous use. Overall we expect it to be in very good condition, but if you are not entirely satisfied please get in touch with us
Trustpilot