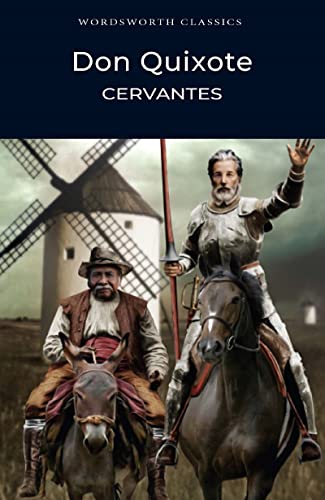 Used Price
2,99 £
Free Shipping in the UK
Cervantes' tale of the deranged gentleman who turns knight-errant have found its way into films, cartoons and even computer games. Intended as a parody of the most popular escapist fiction, the 'books of chivalry', this precursor of the modern novel broadened and deepened into a sophisticated, comic account of the contradictions of human nature.
Very Good Good

Translated by P. A. Motteux

With an Introduction and Notes by Stephen Boyd, University College, Cork

Cervantes' tale of the deranged gentleman who turns knight-errant, tilts at windmills and battles with sheep in the service of the lady of his dreams, Dulcinea del Toboso, has fascinated generations of readers, and inspired other creative artists such as Flaubert, Picasso and Richard Strauss. The tall, thin knight and his short, fat squire, Sancho Panza, have found their way into films, cartoons and even computer games.

Supposedly intended as a parody of the most popular escapist fiction of the day, the `books of chivalry', this precursor of the modern novel broadened and deepened into a sophisticated, comic account of the contradictions of human nature. On his `heroic' journey Don Quixote meets characters of every class and condition, from the prostitute Maritornes, who is commended for her Christian charity, to the Knight of the Green Coat, who seems to embody some of the constraints of virtue.

Cervantes' greatest work can be enjoyed on many levels, all suffused with a subtle irony that reaches out to encompass the reader, and does not leave the author outside its circle.

Peter Motteux's fine eighteenth-century translation, acknowledged as one of the best, brilliantly succeeds in communicating the spirit of the original Spanish.

GOR000550976
Don Quixote by Miguel de Cervantes
Miguel de Cervantes
Wordsworth Classics
Used - Very Good
Paperback
Wordsworth Editions Ltd
1992-05-05
800
1853260363
9781853260360
N/A
Book picture is for illustrative purposes only, actual binding, cover or edition may vary.
This is a used book - there is no escaping the fact it has been read by someone else and it will show signs of wear and previous use. Overall we expect it to be in very good condition, but if you are not entirely satisfied please get in touch with us.