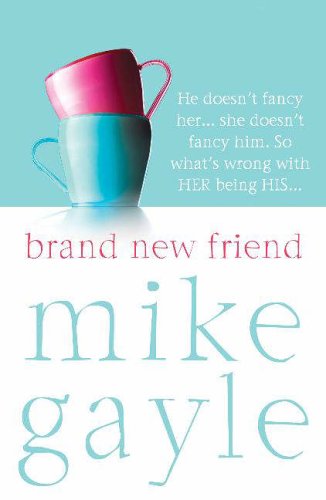 In Stock
£5.49
A brilliant romantic comedy from number one bestselling author Mike Gayle, author of MY LEGENDARY GIRLFRIEND, MR COMMITMENT, TURNING THIRTY and DINNER FOR TWO: finding friends is hard to do...
Like New Very Good
Only 1 left

'Funny and well-observed, this is another sure-fire hit' Heat

When Rob's girlfriend asks him to leave London and live with her in Manchester not only will it mean moving cities, it'll also mean leaving behind his best mate in the entire world. Believing that love conquers all and convinced of his ability to make new friends, Rob takes the plunge.

Six months in, and yet to find so much as a regular drinking buddy, Rob realises that sometimes making friends in your thirties can be the hardest thing to do. With drastic action needed, his girlfriend puts an ad in the classifieds for him. Three excruciatingly embarrassing "bloke dates" later, Rob begins to truly despair. Until his luck changes . . .

There's just one problem. Apart from knowing less than nothing about music trivia, football, and the vital statistics of supermodels, Rob's new friend has one huge flaw . . .

'Funny and well observed, this is the perfect summer read'. * Sunday Express *
'More insights into the male psyche... fans will love it' * Cosmopolitan *
'Funny and well-observed, this is another sure-fire hit.' * Heat *
'A warm, funny tale of friendships between men and women and how they will never work' * Easy Living *
'Mike Gayle's written about it all' * Select Living *

GOR010475817
Brand New Friend by Mike Gayle
Mike Gayle
Used - Like New
Paperback
Hodder & Stoughton General Division
2006-05-22
352
0340825405
9780340825402
N/A
Book picture is for illustrative purposes only, actual binding, cover or edition may vary.
The book has been read, but looks new. The book cover has no visible wear, and the dust jacket is included if applicable. No missing or damaged pages, no tears, possible very minimal creasing, no underlining or highlighting of text, and no writing in the margins.