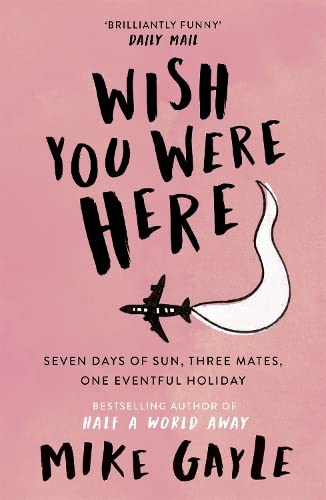 Wish You Were Here
by Mike Gayle

Out of Stock
£3.99
A brilliant romantic comedy exploring beach basics for the broken-hearted from number one bestselling author Mike Gayle, author of MY LEGENDARY GIRLFRIEND, MR COMMITMENT, TURNING THIRTY and DINNER FOR TWO
Like New
Only 0 left

Wish You Were Here Summary

Wish You Were Here by Mike Gayle

After ten years together Charlie Mansell has been dumped by his live-in girlfriend, Sarah. All he wants to do is wallow in misery, but mates Andy and Tom have a better idea: a week of sun, sea and souvlaki in Malia, party capital of the Greek islands.

But Charlie and his mates aren't eighteen any more. Or even under thirty. And it shows.

It isn't the cheap beer, the late nights or even the fast-food that's the problem. It's girls. And life. And most of all . . . each other. WISH YOU WERE HERE is a heart-warming, funny and wise tale about love and friendship and how seven days in the sun can change your life forever.

Wish You Were Here Reviews

spot on, easy beach read. Just add sangria! * Independent *
'Mike Gayle's the guy to give us a tantalising insight into the way men's minds tick . . . this romantic romp is bound to be another huge success . . . a feel-good read with lots of laughs.' * Woman *
This has the makings of another Mike Gayle classic . . . this is spot on, easy beach read. Just add sangria. * Independent *
As you'd expect from Gayle, the laughs flow thick and fast, making this a top match for your sunny holiday spirits. * Glamour *
An observant offering * Heat *
The prolific Mike Gayle knows a thing or two about the male psyche, and how not even an extended adolescence will prevent the pain from catching up in the end. * Herald *
If we needed more proof that men don't think like women, then Wish You Were Here delivers it in extra strength doses . . . A fun story of three 30 somethings as they come to rueful - and thankful - realisation that they are no longer 18. * Candis *
This book makes great beach reading . . . A heartwarming and funny tale. * Love It! *
A delightfully witty tale * Star *

GOR010484393
Wish You Were Here by Mike Gayle
Mike Gayle
Used - Like New
Paperback
Hodder & Stoughton General Division
2008-07-10
416
0340825421
9780340825426
N/A
Book picture is for illustrative purposes only, actual binding, cover or edition may vary.
This is a used book - there is no escaping the fact it has been read by someone else and it will show signs of wear and previous use. Overall we expect it to be in very good condition, but if you are not entirely satisfied please get in touch with us.