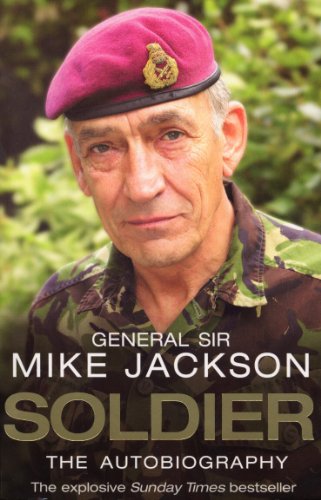 Soldier: The Autobiography
by Mike Jackson

In Stock
£4.49
General Sir Mike Jackson's illustrious career in the British Army has spanned almost 45 years and all that time he has shown loyalty, courage and commitment to the British army whilst also being an undeniable media attraction.
Very Good Good
6 in stock

Soldier: The Autobiography by Mike Jackson

General Sir Mike Jackson's illustrious career in the British Army has spanned almost 45 years and all that time he has shown loyalty, courage and commitment to the British army whilst also being an undeniable media attraction. A man of substance where foreign policy is concerned, he has served in theatres from the Artic to the jungle but is perhaps best known for his role in charge of the British troops to end ethnic cleansing in Kosovo, for assembling the British ground component of the coalition that toppled the Taliban, for equipping and organising the army we dispatched to defeat in Iraq and for re-organising the British army with aplomb. His drive, enthusiasm and dominating personality were always popular with his soldiers and drove him right to the top of his profession. He may have been a general but he never stopped caring about the men and women in his charge, despite the politics. Soldier: The Autobiography exhibits all the qualities for which Jackson is admired; his professionalism, his honesty, his directness, his exuberance and his sense of humour. Most of all it gives a vivid sense of what modern soldiering entails.

"Engagingly recounted with both intelligence and candour...General Jackson is a man of high principles, who on more than one occasion was prepared to lay his career on the line to defend [his] beliefs. In this highly readable and fascinating book, he speaks a great deal of good sense. More importantly, he is able to publicly voice his concerns for the future and defend the soldiers he clearly cares about" -- James Holland * Sunday Telegraph *
"Utterly compelling...Jackson has provided a model of the modern military commander, media friendly, internationally minded and politically sensitive...Indispensable reading" -- Andro Linklater * The Spectator *
"Insightful and valuable...In his account of his career, he has exposed the weaknesses and failures that led to the challenges facing our troops in Iraq and Afghanistan today" -- Michael Evans * The Times *
"A very readable, personal account of a man who rose to the top of the army and gained a reputation for being a 'no-nonsense' commander" -- Richard Norton-Taylor * The Guardian *
"His trademark blunt honesty and humour are to the fore in his autobiography...He has a very interesting story to tell...An engaging and honest account that would repay reading by all those who seek to understand the 21st century British army" * The Independent *

General Sir Mike Jackson is the best known British General of modern times. He retired in the autumn of 2006 after almost 45 years of service in the British army finishing as its head as Chief of the General Staff.

GOR001155365
Soldier: The Autobiography by Mike Jackson
Mike Jackson
Used - Very Good
Paperback
Transworld Publishers Ltd
2008-05-19
528
0552156027
9780552156028
N/A
Book picture is for illustrative purposes only, actual binding, cover or edition may vary.
This is a used book - there is no escaping the fact it has been read by someone else and it will show signs of wear and previous use. Overall we expect it to be in very good condition, but if you are not entirely satisfied please get in touch with us.