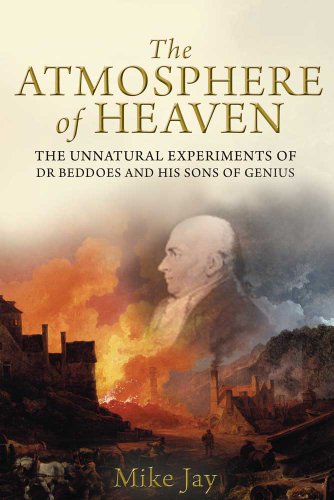 The Atmosphere of Heaven
by Mike Jay

In Stock
£5.49
At the Pneumatic Institution in Bristol, founded in the closing years of the eighteenth century, dramatic experiments with gases precipitated not only a revolution in scientific medicine but also in the history of ideas. This book tells the story of Dr Beddoes and the brilliant circle who surrounded him.
Very Good
Only 1 left

The Atmosphere of Heaven Summary

The Atmosphere of Heaven: The Unnatural Experiments of Dr Beddoes and His Sons of Genius by Mike Jay

At the Pneumatic Institution in Bristol, England, founded in the closing years of the eighteenth century, dramatic experiments with gases precipitated not only a revolution in scientific medicine but also in the history of ideas. Guided by the energy of maverick doctor Thomas Beddoes, the institution was both laboratory and hospital-the first example of a modern medical research institution. But when its members discovered the mind-altering properties of nitrous oxide, or laughing gas, their experiments devolved into a pioneering exploration of consciousness with far-reaching and unforeseen effects.

This riveting book is the first to tell the story of Dr. Beddoes and the brilliant circle who surrounded him: Erasmus Darwin, Samuel Taylor Coleridge, and Robert Southey, who supported his ideas; James Watt, who designed and built his laboratory; Thomas Wedgwood, who funded it; and the dazzling young chemistry assistant, Humphry Davy, who identified nitrous oxide and tested it on himself, with spectacular results. Medical historian Mike Jay charts the chaotic rise and fall of the institution in this fast-paced account, and reveals its crucial influence-on modern drug culture, attitudes toward objective and subjective knowledge, the development of anesthetic surgery, and the birth of the Romantic movement.

The Atmosphere of Heaven Reviews

"'Magnificent!' Oliver Sacks 'Enthralling. This is exactly the kind of cross-cultural biography we need. Lively and sympathetic, it restores the renegade Dr Thomas Beddoes to his rightful place in scientific history, but also to his revolutionary circle of literary friends.' Richard Holmes"

Mike Jay has written extensively on scientific and medical history and is a specialist in the study of drugs. His books include the award-winning The Air Loom Gang: The Strange and True Story of James Tilly Matthews and His Visionary Madness. He lives in London.

GOR005047619
The Atmosphere of Heaven: The Unnatural Experiments of Dr Beddoes and His Sons of Genius by Mike Jay
Mike Jay
Used - Very Good
Paperback
Yale University Press
2010-08-13
304
0300168918
9780300168914
N/A
Book picture is for illustrative purposes only, actual binding, cover or edition may vary.
This is a used book - there is no escaping the fact it has been read by someone else and it will show signs of wear and previous use. Overall we expect it to be in very good condition, but if you are not entirely satisfied please get in touch with us.