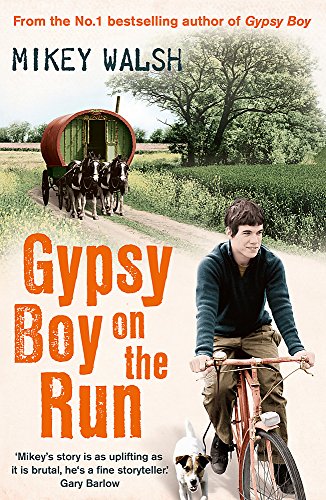 Gypsy Boy on the Run by Mikey Walsh

The follow-up to the Number 1 bestseller, GYPSY BOY.

Gypsy Boy on the Run by Mikey Walsh

The incredible sequel to GYPSY BOY

GYPSY BOY: ON THE RUN picks up from where GYPSY BOY left off, and tells the gripping, page-turning story of Mikey's battle to escape the Romany gypsy camp he grew up on.

After centuries of persecution Gypsies are wary of outsiders and if you choose to leave, you can never come back. Torn between his family and his heart, Mikey struggles to come to terms with his ancient inheritance and dreams of finding a place where he can really belong.

He eventually finds the courage to run away from the camp and from all he knows, and quickly discovers life on the outside world isn't all he expected. After learning his father had put a contract out on his life and that he was now being hunted down by gangs of gypsy thugs determined to claim their reward, Mikey realises that his life will never be the same again.

ON THE RUN is a coming-of-age story that sees Mikey come to terms with his sexuality and his past and start to build a new life for himself and find a place to finally call home.

Mikey's story is as uplifting as it is brutal, he's a fine storyteller. * Gary Barlow *
Funny, touching and heartbreaking in equal measures, Gypsy Boy on the Run is a coming-of-age tale like no other. Mikey Walsh's writing is fresh, raw and utterly compelling - this is a story that stays with you long after you've turned the final page. * Jane Bruton, Editor, Grazia Magazine *
An incredible story of a unique life. So amazing, you'll miss your bus stop. * HEAT *
'It was a revelation. Moving, terrifying, funny and brilliant. I shall never forget it - an amazing achievement' (on Gypsy Boy) * Stephen Fry *
Determination and the kindness of strangers make his tale an uplifting one. * Daily Express *
'The boldly intimate memoir of an English Gypsy's struggle to define himself and his sexuality outside the bounds of traditional Romany culture. ... A great-hearted book of tenderness and brutality.' * Kirkus Reviews *
Mikey Walsh was one of the first Romany Gypsies ever to write a book. He grew up living in a caravan on sites across the UK, and had hardly any schooling. He taught himself to read and write, and his first book Gypsy Boy published in 2008 and became a Number 1 Bestseller. It sold all over the world and a film adaptation is in the works as a joint production between BBC Films and Bowery & Bond. Mikey's second book, Gypsy Boy on the Run follows Mikey as he leaves the Gypsy camp, and takes his first steps in to the real - Gorgia - world, to find a place to belong. Mikey has had overwhelming support from all over the world since the publication of Gypsy Boy, including Stephen Fry who tweeted, 'It was a revelation. Moving, terrifying, funny and brilliant. I shall never forget it - an amazing achievement'. Attitude magazine called it 'the best memoir since Running with Scissors' and even Dermot O'Leary and Dannii Minogue have reviewed it.
GOR003352779
9781444720228
1444720228
Gypsy Boy on the Run by Mikey Walsh
Mikey Walsh
Used - Very Good
Paperback
Hodder & Stoughton General Division
2011-11-24
320
N/A
Book picture is for illustrative purposes only, actual binding, cover or edition may vary.
This is a used book - there is no escaping the fact it has been read by someone else and it will show signs of wear and previous use. Overall we expect it to be in very good condition, but if you are not entirely satisfied please get in touch with us
Trustpilot