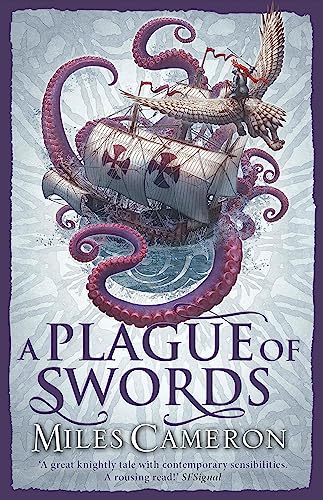 A Plague of Swords
by Miles Cameron

Used Price
£5.19
New RRP £11.99
Free Shipping in the UK
Forget George and the Dragon. Forget Sir Lancelot and tales of Knightly exploits. This is dirty, bloody work. This is violent, visceral action. This is a mercenary knight as you've never seen one before.
Reviews:
Trustpilot
Very Good Good

A Plague of Swords Summary

A Plague of Swords by Miles Cameron

The Red Knight withstood the full might of his enemy, and won the day. In a victory which will be remembered through the ages, he brought disparate factions together and turned them into allies against a more powerful foe than they had ever seen.
Now, he will need his allies more than ever.

Because behind one adversary hid another - one with allies of their own - whose goal was never to destroy Alba, but to distract the Kingdom while achieving his true aim. And whatever it is, it's probably not in the Red Knight's interest.

With one army defeated, now the Red Knight must fight again . . . and for every one of his allies there is a corresponding enemy. Spread out in different lands, and on sea, it will all come down to one last gamble. And to whether or not the Red Knight has guessed their foe's true intentions.
With each throw of the dice, everything could be lost . . .

Customer Reviews - A Plague of Swords

A Plague of Swords Reviews

This is more than a genre novel, THE RED KNIGHT is a modern myth, a legend to substitute the traditional tales of heroism and valor. It has all the trappings of a great knightly tale with contemporary sensibilities. There is violence and moral ambiguity, but at its core is the beating heart of chivalry. A rousing read! * SFSIGNAL *
From a brutal bear baiting scene during the novel's early chapters to the full blown, frenetic chaos of main battle near the book's end things get pretty bloody. Cameron definitely has the descriptive skills when it comes to placing the reader right at the heart of the action. This author's writing perfectly captures the anarchy and confusion that exists in the heat of the moment...Recommended * theeloquentpage.co.uk *

Miles Cameron is a fantasy novelist who currently lives in Toronto, Canada. He is a military veteran and has a degree in Medieval History.

His debut novel (The Red Knight), first in The Traitor Son novels, was one of the most acclaimed fantasy debuts of 2012 and nominated for the David Gemmell Morningstar award. It is followed by The Fell Sword, published in 2014.

You can learn more at www.christiancameronauthor.com, or by following @Phokion1 on twitter.

GOR008814240
A Plague of Swords by Miles Cameron
Miles Cameron
Used - Very Good
Paperback
Orion Publishing Co
2017-08-10
480
1473208874
9781473208872
N/A
Book picture is for illustrative purposes only, actual binding, cover or edition may vary.
This is a used book - there is no escaping the fact it has been read by someone else and it will show signs of wear and previous use. Overall we expect it to be in very good condition, but if you are not entirely satisfied please get in touch with us.