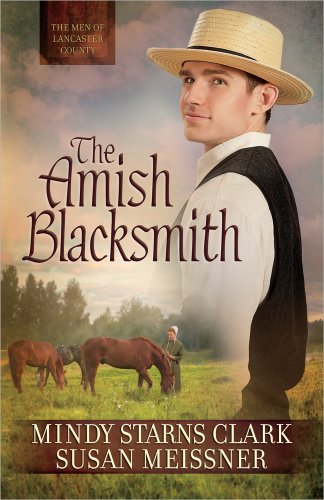 Apprenticed blacksmith Jake Miller is tasked with helping his boss's niece connect with their Amish community in Lancaster County. Priscilla's love of horses and her ability to soothe them draw Jake's notice, and her fragile heart calls to his in a way he did not expect.

New from bestselling authors Mindy Starns Clark and Susan Meissner, The Amish Blacksmith (Book 2 in The Men of Lancaster County series) explores the men of an Amish community in Lancaster County, how their Amish beliefs play out in their unique roles, and the women who change their lives.

Apprenticed blacksmith Jake Miller is skeptical of Priscilla Kinsinger's innate ability to soothe troubled horses, especially when he has own ideas on how to calm them. Six years earlier, Priscilla's mother died in an awful accident at home, and Priscilla's grief over losing her mother was so intense that she was sent to live with relatives in Indiana. She has just returned to Lancaster County.

Not that her homecoming matters to Jake, who is interested in courting lighthearted Amanda Shetler. But Jake's boss is Priscilla's uncle, and when the man asks Jake to help his niece reconnect with community life, he has no choice but to do just that. Surprisingly, he finds himself slowly drawn to the beautiful but emotionally wounded Priscilla.

Jake then determines to prove to her that it's not her fault her mother died, but what he discovers will challenge everything they both believe about the depth of love and the breadth of forgiveness.

Mindy Starns Clark is the bestselling author of more than 20 books, both fiction and nonfiction, with over a million copies sold. Mindy and her husband, John, have two adult children and live in Pennsylvania. www.mindystarnsclark.com

Susan Meissner is a multi-published author, speaker, and writing workshop leader with a background in community journalism. Her novels include The Shape of Mercy, named by Publishers Weekly as one of the 100 Best Novels of 2008 and a Carol Award winner. She is a pastor's wife and the mother of four young adults. When she's not writing, Susan writes small group curriculum for her San Diego church. Visit Susan at her website: www.susanmeissner.com, on Twitter at @SusanMeissner, or at www.facebook.com/susan.meissner.

GOR008223729
The Amish Blacksmith by Mindy Starns Clark
Mindy Starns Clark
The Men of Lancaster County
Used - Good
Paperback
Harvest House Publishers,U.S.
2014-08-01
352
0736957367
9780736957366
Winner of Christy Awards (Contemporary Series) 2015
Book picture is for illustrative purposes only, actual binding, cover or edition may vary.
The book has been read but remains in clean condition. All pages are intact and the cover is intact. Some minor wear to the spine.