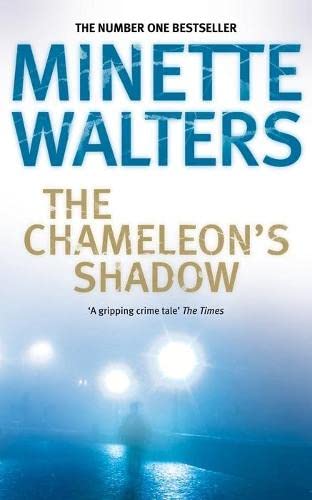 The Chameleon's Shadow
by Minette Walters

In Stock
£4.49
The stunning bestseller from the CWA Gold Dagger award-winning Minette Walters.
Like New Very Good
Only 1 left

The Chameleon's Shadow by Minette Walters

A compelling look into damaged minds, The Chameleon's Shadow is a psychological thriller from crime queen Minette Walters.

When Lieutenant Charles Acland is flown home from Iraq with serious head injuries, he faces not only permanent disfigurement but also an apparent change to his previously outgoing personality.

Crippled by migraines, and suspicious of his psychiatrist, he begins to display sporadic bouts of aggression, particularly against women, especially his ex-fiancee who seems unable to accept that the relationship is over.

After his injuries prevent his return to the army, he cuts all ties with his former life and moves to London. Alone and unmonitored, he sinks into a private world of guilt and paranoid distrust . . . until a customer annoys him in a Bermondsey pub and he attracts the attention of local police investigating three murders which appear to have been motivated by extreme rage . . .

Under suspicion, Acland is forced to confront the real issues behind his isolation. How much control does he have over the dark side of his personality? Do his migraines contribute to his rages? Has he always been the duplicitous chameleon that his ex-fiancee claims?

And why - if he hates women - does he look to a woman for help?

"Suspense-filled . . . This multi-layered story by England's best-selling female crime writer blends current events, the politics of sexual relationships and the development of personal identity into a psychologically compelling novel."
-"USA Today
""A Walters novel is like no other. She bases her books on facts gathered from real life [and] then embosses with her own painstaking research and fertile imagination . . . The revelations are astounding."
-"Pittsburgh Post-Gazette
"
"A sizzling psychological thriller."
-"Publishers Weekly
""Solid plotting, superb characterization, and fascinating information on traumatic brain injuries make this compelling thriller a sure winner . . . Walters' latest suspense tale mixes the creepiness of [an] old noir movie with a contemporary, ripped-from-the-headlines exploration of the aftereffects of traumatic brain injury on soldiers."
-"Booklist "(starred)
Praise from the UK & Canada:
"What marks Minette Walters out from the rest is not just the complex yet utterly convincing psychological profiles she draws of her characters, but the fact that she really gets into the heads of some disturbing people . . . No wonder she is the country's bestselling female crime writer. But even this label does not do justice to the scope and breadth of her gripping, terrifying novels. "The Chameleon's Shadow" is another classic."
-"The Mirror"
"Minette Walters is one of crime fiction's finest creators of character. That ability is on full show in this novel of trust and fear . . . All the characters are beautifully built, and Acland is a brilliant creation . . . If you like a character-driven crime novel with greatpsychological depth, you'll love "The Chameleon's Shadow,""
-"Globe and Mail "(Toronto)
"An accomplished psychological thriller . . . "The Chameleon's Shadow "is as frightening and as compulsively readable as Walters's previous novels, with as ingenious a plot."
-"Times Literary Supplement
""Minette Walters holds a unique place in crime fiction today. That's because she does so much more than produce tense crime thrillers . . . This is another page-turner and another novel which will deservedly take its place on the bestseller list."
-"Sunday Express"
"Minette Walters is an adventurous novelist . . . In "The Chameleon's Shadow," [she] leads us to the answer with her usual disturbing ability to look into damaged minds."
-"The Times "(London)
"A disturbing and fascinating thriller . . . Walters's characters ring true whether she's dealing with a career-obsessed young army officer, a teenage thief or a dirty old man edging towards senility."
-"The Spectator

GOR010582400
The Chameleon's Shadow by Minette Walters
Minette Walters
Used - Like New
Paperback
Pan Macmillan
2008-05-02
544
0330449559
9780330449557
N/A
Book picture is for illustrative purposes only, actual binding, cover or edition may vary.
The book has been read, but looks new. The book cover has no visible wear, and the dust jacket is included if applicable. No missing or damaged pages, no tears, possible very minimal creasing, no underlining or highlighting of text, and no writing in the margins.