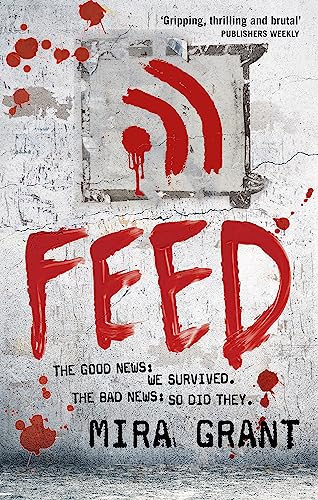 'Gripping, thrilling and brutal . . . a masterpiece of suspense' Publishers Weekly

'The zombie novel Robert A. Heinlein might have written' Sci-Fi Magazine

The year was 2014. We had cured cancer. We had beaten the common cold. But in doing so we created something new, something terrible that no one could stop. The infection spread, virus blocks taking over bodies and minds with one, unstoppable command: FEED.

Now, twenty years after the Rising, bloggers Georgia and Shaun Mason are on the trail of the biggest story of their lives - the dark conspiracy behind the infected. The truth will get out, even if it kills them.

The zombie novel Robert A. Heinlein might have written * SCI-FI MAGAZINE *
Gripping, thrilling and brutal . . . McGuire has crafted a masterpiece of suspense with engaging, appealing characters who conduct a soul-shredding examination of what's true and what's reported * PUBLISHERS WEEKLY *
FEED is a proper thriller with zombies . . . A taut, well-written story * SFX *
Zombie mayhem, political snark and pointedly funny observations -- LOCUS
Astonishing . . . a fascinating exploration of the future -- NEW YORK TIMES
This book will absolutely take your breath away . . . the best zombie-themed writing since World War Z -- FRINGE

Mira Grant is the open pseudonym of Seanan McGuire, a successful fantasy writer. She can be found online at www.seananmcguire.com

GOR003775024
Feed: The Newsflesh Trilogy: Book 1 by Mira Grant
Mira Grant
Newsflesh Series
Used - Very Good
Paperback
Little, Brown Book Group
2011-04-07
592
035650056X
9780356500560
N/A
Book picture is for illustrative purposes only, actual binding, cover or edition may vary.
The book has been read but remains in clean condition. All pages are intact and the cover is intact. Some minor wear to the spine.