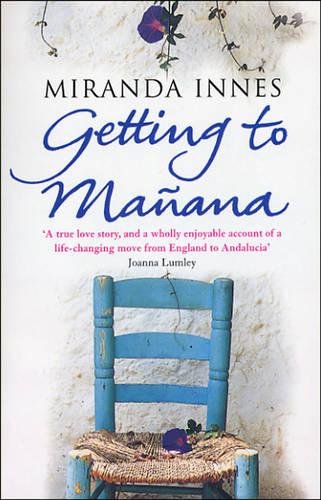 Getting To Manana
by Miranda Innes

In Stock
£3.99
Nor had she realised what a struggle re-building the house, room by room, or planting a garden in the hostile terrain of southern Spain would be.
Very Good Good
Only 1 left

Getting To Manana Summary

Getting To Manana by Miranda Innes

In 1996, former Country Living garden editor Miranda Innes decided to change her life completely. Tired of urban living, bored of her career, out of love with her long-standing partner, she and her son spied a romantic ruin in Andalusia amid its own olive groves, and made an offer. What happened next - selling her London house, and handing in her notice at the magazine - was going to be straightforward, or so she thought. She had not counted on the sudden emergence of a New Man in her life, the plans of Arsenal football ground to purchase her back garden, a badly slipped disc and the logistics involved in moving a lifetime's possessions. Nor had she realised what a struggle re-building the house, room by room, or planting a garden in the hostile terrain of southern Spain would be. But helped by her new husband, Dan, and an assortment of eccentric locals, not least by the worldly wisdom of Juan the builder, she made it, and over the ensuing four years, the house and pool were built and the garden began to take shape. This is the story of how Miranda got to manana, of her love affair with Spain, and a countryside where 'great jagged peaks range above little fields, white villages tumble like sugar cubes down the sides of hills, and white houses grow room by room in a puzzle of rectangles, topped by corrugated cinnamon-brown terracotta tiles moulded on a man's thigh'. Illustrated throughout with line-drawings by Dan Pearce, Getting to Manana is a book to read and treasure.

Getting To Manana Reviews

"'If you like writing on houses, food and relationships, this smart little book has much to recommend it'" * Daily Telegraph *
"'A true love story, and a wholly enjoyable account of a life-changing move from England to Andalucia'" -- Joanna Lumley
"'A terrific read, lyrically descriptive and down to earth'" * Choice *
"'An inspiring read'" * Glasgow Herald *
"'A beautiful book'" -- Susan Hampshire

Former garden editor of Country Living, and sister of Jocasta Innes, Miranda Innes lives in Spain with her husband, Dan Pearce, and an assortment of dogs and cats. Her first book, an account of the restoration of her house and garden in Andalucia, Getting to Manana, is published in paperback by Black Swan.

GOR001127821
Getting To Manana by Miranda Innes
Miranda Innes
Used - Very Good
Paperback
Transworld Publishers Ltd
2004-07-05
368
0552770981
9780552770989
N/A
Book picture is for illustrative purposes only, actual binding, cover or edition may vary.
This is a used book - there is no escaping the fact it has been read by someone else and it will show signs of wear and previous use. Overall we expect it to be in very good condition, but if you are not entirely satisfied please get in touch with us.