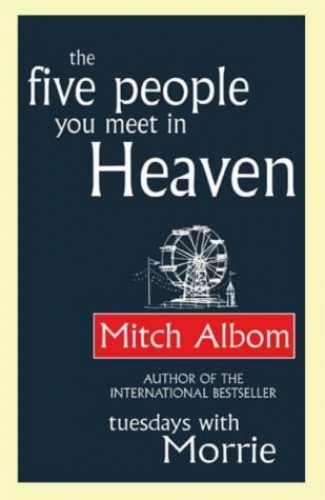 The Five People You Meet In Heaven
by Mitch Albom

In Stock
£3.29
Beautifully written first novel that addresses the meaning of life - and life after death - from the internationally bestselling author of the non-fiction TUESDAYS WITH MORRIE.
Very Good Good Well Read
328 in stock

The Five People You Meet In Heaven Summary

The Five People You Meet In Heaven by Mitch Albom

The first novel in the Heaven series from the internationally bestselling author, Mitch Albom.

THE FIVE PEOPLE YOU MEET IN HEAVEN is a wonderfully moving fable that addresses the meaning of life, and life after death, in the poignant way that made TUESDAYS WITH MORRIE such an astonishing book.

The novel's protagonist is an elderly amusement park maintenance worker named Eddie who, while operating a ride called the 'Free Fall', dies while trying to save a young girl who gets in the way of a falling cart that hurtles to earth. Eddie goes to heaven, where he meets five people who were unexpectedly instrumental in some way in his life. While each guide takes him through heaven, Eddie learns a little bit more about what his time on earth meant, what he was supposed to have learned, and what his true purpose on earth was.

Throughout there are dramatic flashbacks where we see scenes from his troubled childhood, his years in the army in the Philippines jungle, and with his first and only love, his wife Marguerite.

THE FIVE PEOPLE YOU MEET IN HEAVEN is the perfect book to follow TUESDAYS WITH MORRIE. Its compellingly affecting themes and lyrical writing will fascinate Mitch Albom's huge readership.

The Five People You Meet In Heaven Reviews

Albom has done it again... FIVE PEOPLE is a powerful book, powerful enough to make one's inner snob feel a little uncomfortable...Albom has touched the lives of a lot of people he never even knew. If there is a heaven, he can expect to have around 5.7 million people waiting for him there * TIME *
[Eddie] learns not only about his life but also about what his time on earth meant. It is simple, unaffected and written with great feeling * PUBLISHING NEWS *
Simply told, sentimental and profoundly true, this is a contemporary American fable that will be cherished by a vast readership . . . this slim tale, like Charles Dickens's A CHRISTMAS CAROL, reminds us of what really matters here of earth, of what our lives are given to us for * PUBLISHERS WEEKLY *
Mitch Albom lifts us to a new level ... You'll find here echoes of the classics - The Odyssey for one - and that puts Albom's book in the best of company * Frank McCourt, author of ANGELA'S ASHES *

GOR000475186
The Five People You Meet In Heaven by Mitch Albom
Mitch Albom
Heaven
Used - Very Good
Paperback
Little, Brown Book Group
2004-09-02
240
0751536822
9780751536829
Long-listed for IMPAC Dublin Literary Award 2005 (UK)
Book picture is for illustrative purposes only, actual binding, cover or edition may vary.
This is a used book - there is no escaping the fact it has been read by someone else and it will show signs of wear and previous use. Overall we expect it to be in very good condition, but if you are not entirely satisfied please get in touch with us.