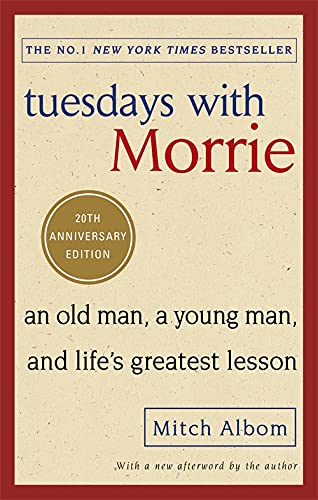 Tuesdays With Morrie
by Mitch Albom

A special 20th anniversary edition of the beloved international bestseller that changed millions of lives, updated with a new foreword from the author

Tuesdays With Morrie: An old man, a young man, and life's greatest lesson by Mitch Albom

Maybe it was a grandparent, or a teacher or a colleague?

Someone older, patient and wise, who understood you when you were young and searching, and gave you sound advice to help you make your way through it?

For Mitch Albom, that person was Morrie Schwartz, his college professor from nearly twenty years ago.

Maybe, like Mitch, you lost track of this mentor as you made your way, and the insights faded. Wouldn't you like to see that person again, ask the bigger questions that still haunt you?

Mitch Albom had that second chance. He rediscovered Morrie in the last months of the older man's life. Knowing he was dying of ALS - or motor neurone disease - Mitch visited Morrie in his study every Tuesday, just as they used to back in college. Their rekindled relationship turned into one final 'class': lessons in how to live.

TUESDAYS WITH MORRIE is a magical chronicle of their time together, through which Mitch shares Morrie's lasting gift with the world.

Praise for Tuesdays with Morrie:

'An extraordinary contribution to the literature of death' Boston Globe

GOR010199339
Tuesdays With Morrie: An old man, a young man, and life's greatest lesson by Mitch Albom
Mitch Albom
Used - Like New
Paperback
Little, Brown Book Group
2017-03-27
224
0751569577
9780751569575
N/A
Book picture is for illustrative purposes only, actual binding, cover or edition may vary.
The book has been read, but looks new. The book cover has no visible wear, and the dust jacket is included if applicable. No missing or damaged pages, no tears, possible very minimal creasing, no underlining or highlighting of text, and no writing in the margins.