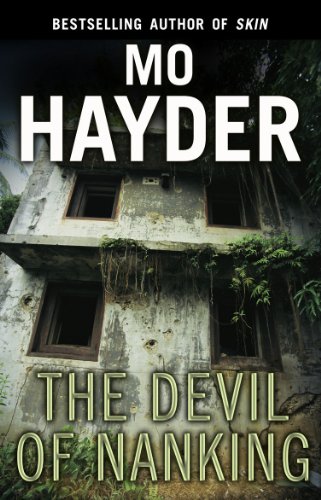 The Devil of Nanking
by Mo Hayder

Used Price
£4,99
New RRP £9,99
Free Shipping in the UK
Tokyo, 1990Grey Hutchins is in pursuit of an obsession. Grey is certain that it does, and that it lies hidden - somewhere in Tokyo. One gangster dominates - an old man in a wheelchair surrounded by a terrifying entourage - who is rumoured to rely on a powerful elixir for his continued health. It is an elixir that others want - at any price ...
Reviews:
Trustpilot
Very Good Good

The Devil of Nanking Summary

The Devil of Nanking by Mo Hayder

Tokyo, 1990 Grey Hutchins is in pursuit of an obsession. She is searching for a piece of film taken during the infamous Nanking massacre of 1937. Some say it never existed. Grey is certain that it does, and that it lies hidden - somewhere in Tokyo. Alone in an alien city, Grey becomes a hostess in an exclusive club catering for Japanese businessmen - and gangsters. One gangster dominates - an old man in a wheelchair surrounded by a terrifying entourage - who is rumoured to rely on a powerful elixir for his continued health. It is an elixir that others want - at any price ... With its focus on 1990's Tokyo and Nanking in 1937, The Devil of Nanking is a literary thriller of the highest order. With its heady atmosphere of overt violence, lurking fear and sexual tension, this is a novel that takes hold of the reader and does not let go until its explosive final pages.

Customer Reviews - The Devil of Nanking

The Devil of Nanking Reviews

"Haunting, lyrical, disturbing, important, suspenseful and wonderfully written" -- HARLAN COBEN
"Deeply felt and haunting. Elegiac and important. Most of all it sticks with you well after the final page is turned" -- MICHAEL CONNELLY
"Left me stunned and haunted. This is writing of breathtaking power and poetry" -- TESS GERRITSEN
"The epic thriller of the year" -- KARIN SLAUGHTER

GOR001927953
The Devil of Nanking by Mo Hayder
Mo Hayder
Used - Very Good
Paperback
Transworld Publishers Ltd
2010-02-04
480
0553824856
9780553824858
N/A
Book picture is for illustrative purposes only, actual binding, cover or edition may vary.
This is a used book - there is no escaping the fact it has been read by someone else and it will show signs of wear and previous use. Overall we expect it to be in very good condition, but if you are not entirely satisfied please get in touch with us.