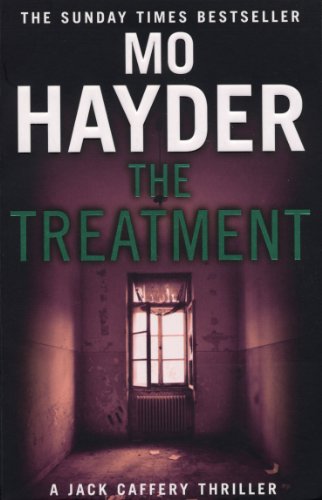 The Treatment
by Mo Hayder

Used Price
£4.19
New RRP £8.99
Free Shipping in the UK
And as he digs deeper - as he attempts to hold his own life together in the face of ever more disturbing revelations about both his past and his present - the real nightmare begins ...
Reviews:
Trustpilot
Very Good Good Well Read

A quiet residential street in south London. A husband and wife are discovered, imprisoned in their own home. Badly dehydrated, they've been bound and beaten. He is close to death. But worse is to come: their young son is missing. When Detective Inspector Jack Caffery is called in to investigate, the similarities with events in his own past make it impossible for him to view this new crime dispassionately. And as he digs deeper - as he attempts to hold his own life together in the face of ever more disturbing revelations about both his past and his present - the real nightmare begins ...

"One of the most frightening books I've ever read... Hayder's gory insights into the dark side are compelling" * GUARDIAN *
"Chilling... the book is surprisingly hard to put down. The plot develops with satisfying unpredictability; the characters are compellingly drawn... its final twist a bravura savagery" * DAILY TELEGRAPH *
"Bleak, powerful... The Treatment is cleverly plotted and Caffery is a believable creation" * OBSERVER *
"Mo Hayder's debut, Birdman, was deservedly an unqualified success... and Hayder has lost none of her descriptive expertise along the way" * TIME OUT *
"There is no better example of a contemporary masterpiece than Mo Hayder's The Treatment. Whether she's exploring social issues such as homelessness and child abuse or just scaring the bejeezus out of you, Hayder spins a tale that feels like a razor slicing apart your soul. The plotting is extremely disciplined, the sort of structure to which all authors should aspire, and the story is a searing dark tale that makes you bolt up in bed during the middle of the night, wondering if that sound you heard was the cat, or Death dragging its sickle across the floor" -- Karin Slaughter * SUNDAY TELEGRAPH *

GOR001197343
The Treatment: Jack Caffery series 2 by Mo Hayder
Mo Hayder
Jack Caffery
Used - Very Good
Paperback
Transworld Publishers Ltd
2008-11-08
496
0553820478
9780553820478
N/A
Book picture is for illustrative purposes only, actual binding, cover or edition may vary.
This is a used book - there is no escaping the fact it has been read by someone else and it will show signs of wear and previous use. Overall we expect it to be in very good condition, but if you are not entirely satisfied please get in touch with us.