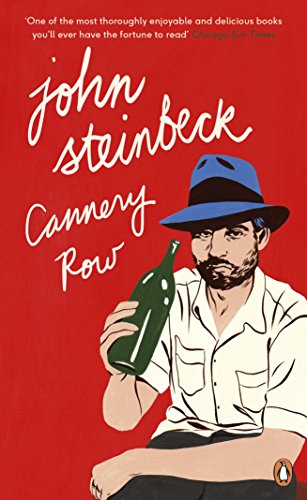 One of the BBC's '100 Novels that Shaped the World'

'Cannery Row in Monterey in California is a poem, a stink, a grating noise, a quality of light, a tone, a habit, a nostalgia, a dream.'

Meet the gamblers, whores, drunks, bums and artists of Cannery Row in Monterey, California, during the Great Depression. They want to throw a party for their friend Doc, so Mack and the boys set about, in their own inimitable way, recruiting everyone in the neighbourhood to the cause. But along the way they can't help but get involved in a little mischief and misadventure. It wouldn't be Cannery Row if it was otherwise, now would it?

One of the most thoroughly enjoyable and delicious books you'll ever have the fortune to read * Chicago Sun Times *
Uninhibited, bawdy, compassionate, inquisitive, deeply intelligent * Daily Telegraph *
There is no more impressive writer on either side of the Atlantic * Time and Tide *
Steinbeck is to be judged by the highest standards * New York Herald Tribune *

John Steinbeck (1902-68) is remembered as one of the greatest and best-loved American writers of the twentieth century. During the 1930s, his works included The Red Pony, Pastures of Heaven, Tortilla Flat, In Dubious Battle, and Of Mice and Men. The Grapes of Wrath, published in 1939, earned him a Pulitzer Prize. In 1962, he was awarded the Nobel Prize for Literature.

GOR008640798
Cannery Row by Mr John Steinbeck
Mr John Steinbeck
Used - Very Good
Paperback
Penguin Books Ltd
2017-07-06
176
0241980380
9780241980385
N/A
Book picture is for illustrative purposes only, actual binding, cover or edition may vary.
This is a used book - there is no escaping the fact it has been read by someone else and it will show signs of wear and previous use. Overall we expect it to be in very good condition, but if you are not entirely satisfied please get in touch with us.